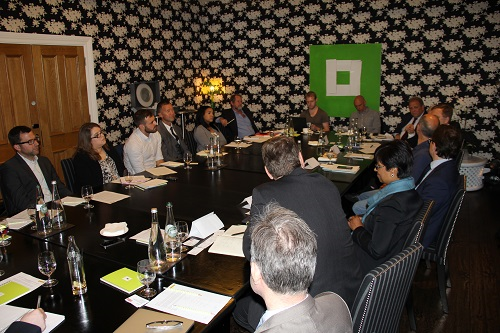 The Internet of Things (IoT) will create millions of job opportunities worldwide, according to leaders from the electrical industry, who poured cold water on speculation that automation could cause massive job redundancies.

Executives from the ‘troops on the ground’ in the battle to prepare businesses and consumers for the IoT revolution claimed the boom in connected devices will create huge amounts of opportunities for electrical professionals. This came as Voltimum, the digital media business and sales enabler for the electrical industry, hosted a roundtable with partners Schneider Electric, Osram, ABB, Philips and Legrand in London.

Tanuja Randery, president UK&I at Schneider Electric, said: “The IoT revolution is going to change the way we work, as individuals, organisations and companies. We have to find new ways of applying our resources, so I don’t agree with those that say it’s going to cause an enormous amount of redundancies.

“I fundamentally believe that IoT won’t work without human interaction of some kind. You can automate processes and create significant efficiency, but at the end of the day there is someone programming the algorithm or analysing the data – because the robots can’t do it. We need 4.5 million developers for IoT alone, so I think anyone that does get made redundant will end up getting jobs elsewhere.”

The influx of smart technology into homes and work buildings, such as connected lighting, could also spell significant benefits for electrical professionals in the near future. Tony Greig, CEO UK&I at Legrand, said: “Like any market you have the innovators and the laggards. There are a lot of contractors wanting to embrace the new technology, and those that don’t will fall by the wayside.

“We’re starting to see smart homes being put into buildings, and that’s actually come from contractors going to builders and saying these connected options are available. The price point will come down and it will become much more affordable, so contractors should look at what’s going on, put together a package and promote it to their customers.”

A key ingredient in the success of IoT will be the establishment and implementation of standards that ensure the market progresses securely. And Timon Rupp, from Osram, explained that it was a requirement of the industry to provide education. “The IoT is still the internet, and it’s built on the same principles and the same encryption technologies,” he said. “As an industry we would be wrong to tell people it’s all safe and it’s up to us to indicate what’s not safe, how to use it and where the risks are. This education is part of what the industry must do, rather than leaving it up to people to figure it out for themselves, when it’s too late.”

This point was echoed by Kai Garrels, at ABB, who explained the standards that are required to safeguard the rise of connected devices. “Function and safety standards ensure that machines and installations are safe and they don’t harm people and have been in place for many years. We then have IT security standards, mainly on the infrastructure, which are also in place but have room to evolve as you wouldn’t apply power plant infrastructure security to your home. Finally there are standards for making connectivity really easy, so that people don’t have to do cryptic configurations or engineering tools but can browse their networks, which are also evolving.”

It will also be vital for industry bodies and trade associations to play their part in ensuring standards and regulations are in place. Gerry O’Donnell, from Philips, said: “Ultimately whatever we put in has to work, our brand names rest on that and the markets will be the judge of it. Trade associations have a part to play on evolving regulations, and they will organise standard protocols.”

These views make it clear that, while a lot of work is required before the IoT enters the mainstream, the backbone of this new technology is in good shape. Voltimum CEO Wolfgang Schickbauer said: “As the leading suppliers of the electrical industry, Voltimum’s shareholders are responsible for building the Internet of Things and putting it to work for enterprises, industries, cities and living spaces across the world.

“From this position at the forefront of the industry we need to ensure we maximise the potential of IoT, and to do that we must support our community of electrical professionals to help them understand the opportunities that digitalisation offers and how they can seamlessly integrate it.” Advantech, a supplier of industrial communication solutions, is proud to release the EKI-2701MPI-5G PoE injector. …