Global sales of industrial robots reached the new record of 380,550 units in 2017. That is an increase of 29 per cent compared to the previous year (2016: 294,300 units). China saw the largest growth in demand for industrial robots, up 58 per cent. Sales in the USA increased by six per cent – in Germany by eight per cent compared to the previous year. These are the initial findings of the World Robotics Report 2018, published by the International Federation of Robotics (IFR) at the automatica 2018 in Munich.

Broken down by industry, the automotive industry continues to lead global demand for industrial robots: In 2017, around 125,200 units were sold in this segment – equivalent to growth of 21 per cent. The strongest growth sectors in 2017 were the metal industry (+54 per cent), the electrical/electronics industry (+27 per cent) and the food industry (+19 per cent). 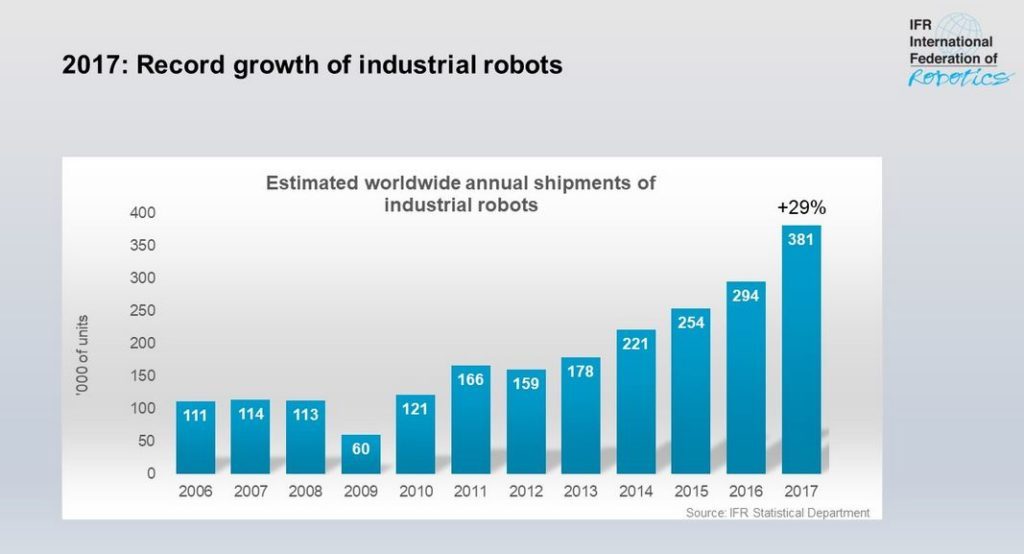 “The growth of industrial robots continues at an impressive pace worldwide,” says Junji Tsuda, president of the International Federation of Robotics. “Key trends such as digitalisation, simplification and human-robot collaboration will certainly shape the future and drive forward rapid development.”

In the course of digitalisation, real production is becoming increasingly connected with the virtual data world, opening up completely new possibilities for analysis – right through to machine learning. Robots will acquire new skills through learning processes. At the same time, the industry is working to simplify the handling of robots. In the future industrial robots should be easier and faster to program using intuitive procedures. Such a technology is not only attractive to established users, but also to small and medium-sized companies, for example, companies who can use it to introduce automation without the need for highly experienced or expert personnel. This development also paves the way for the third major robotics trend: collaboration between humans and robots without protective barriers offers new approaches to new flexible production processes. In the future human-robot collaboration will support the flexible production of small quantities with high complexity.