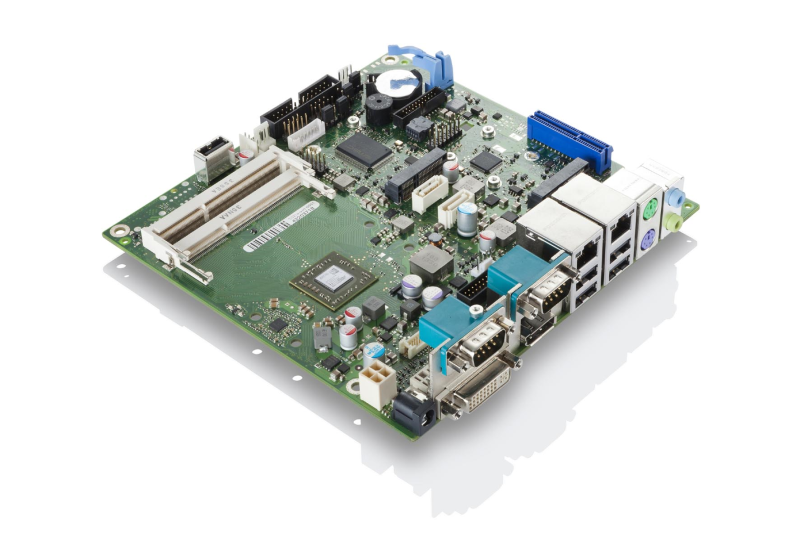 Fujitsu will present their new industrial mini-ITX mainboards D3313-S4 and D3313-S5 for 24/7 continuous operation in an extended temperature range of 0 to 60 degrees Celsius at Embedded World in Nuremberg, Germany, from February 24 to 26, 2015 (hall 2, booth 110). The boards are based on new AMD Embedded G-Series systems-on-a-chip (SOC), previously codenamed “Steppe Eagle”.

Optimised for a great variety of industrial and semi-industrial applications, the boards from the Fujitsu Industrial Series have a product lifecycle of five years. Using single-chip processors or systems on a chip (SOC), they are capable of enhanced computing power at a low level of energy consumption. The D3313-S mainboards by Fujitsu, all based on  AMD Embedded G-Series SOC, support DVI-I, Display Port, and 24-bit dual-channel LVDS. Furthermore, all boards in the D3313-S series come with an m-SATA port and a PCIe Minicard socket supporting USB. The layout of the external I/O ports on the D3313-S4 and D3313-S5 is identical with that of the three D3313-S versions that already exist. As a result, Fujitsu customers already using D3313-S boards can immediately start using the even more powerful new versions as well.

The low amount of energy required by the new SOCs not only saves energy costs, but also offers further design advantages. Less power consumption means less heat generation, which means that fanless systems can be designed using AMD Embedded G-Series SOC mainboards. This not only makes the embedded system less noisy, but also more reliable, as there is no need to use the fragile mechanics of a cooling fan. The fact that the D3313-S mainboards are designed to run continuously at full load between 0 and 60 degrees Celsius also guarantees a very high level of reliability.

Peter Hoser, sales director Systemboard OEM, Fujitsu said, “With the Embedded G-Series SOCs, AMD offers a perfectly scalable single-chip solution for innovative designs based on x86 technology. Thanks to the fact that the new processors by AMD use the same pin layout as their predecessors, the team at our development and manufacturing plant in Augsburg was able to integrate the new, more powerful processors into the existing design with little time and effort. Thus, we can present two very powerful, industrial-grade new mainboards to both new and returning customers at Embedded World.”