The D3598-B workstation mainboard from Fujitsu is not only one of the few mainboards designed to support Xeon W processors from Intel – it is also suitable for use in a larger temperature range and for 24/7 operation. The Extended Lifecycle Series will be available from Rutronik24 until at least the end of 2020, making the Fujitsu mainboard D3598-B ideal for CPU- and GPU-intensive applications with professional workstations.

The new Intel Xeon W processors are available with up to 18 cores. While they use the same R4 socket (LGA-2066) as the Intel Core X series, their feature set is significantly different, with the Xeon W processors offering not only much longer availability than the Core i7/i9-X models, but also supporting up to 512 GB of ECC RAM modules and providing 48 PCIe 3.0 lanes. It also offers 24 chipset PCIe 3.0 lanes, up to eight SATA Gen3 ports, ten USB 3.0 ports, up to 14 USB 2.0 ports and support for PCIe NVME SSDs. 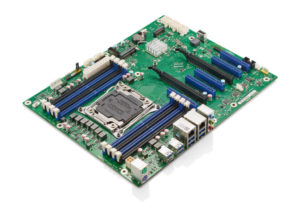 With the D3598-B based on the new Intel C422 chipset, Fujitsu is offering an appropriate workstation mainboard. It has eight memory sockets for the four memory channels of the Xeon W processor. Its maximum of 48 PCIe lanes are spread over seven slots, two of which are implemented in the form of pure PCIe x16 (PEG) slots, enabling two graphic cards to be operated concurrently with a full 16 lanes each. For instance, the D3598-B is specifically recommended in conjunction with professional graphic cards for CPU- and GPU-intensive applications such as medical imaging, CAD/CAM workstations, video editing, animation and imaging workstations, flight and other simulators, and also gaming PCs.

The M.2 PCIe NVME slot also enables SSDs to be used for the operating system, and a wi-fi module can be used concurrently in the mPCIe slot. Fujitsu’s mPCIe-to-M.2 adapters also allow the use of M.2 wi-fi modules. To provide two additional M.2 interfaces, Fujitsu further offers the D3552-A2 expansion card.

For professional workstations, the D3598-B is recommended as part of the Extended Lifecycle Series with a supported temperature range of 0°C to +50°C. It is also suitable for 24/7 operation, for which it will work reliably for five years at 100 per cent load. This dependability is partly due to the capacitors installed on the mainboard, which are designed to operate for 45,000 hours at under +60°C. Comparable boards usually only use capacitors that are designed to operate for 10,000 hours at under +45°C. Thanks to availability until at least the end of 2020, the D3598-B can also be designed into longer-term projects, setting it apart clearly from mainboards based on the X299 chipset. Also, the Intel Xeon processors will be available for much longer than the Core i7/i9 processors for the X299 chipset.

Fujitsu also provides system assembly tools that allows the mainboard to be customised – for instance with in-house company logos, individual setup defaults for serial production or cooling policies that are adapted precisely to the fans installed in the system.