Improvements in efficiency and productivity are a reoccurring theme across many sectors and farmers are not immune from increasing pressure on their time and the demands on the bottom line. All of them at some time will have experienced the frustration of having to stop their vehicle, get out, open a gate, return to the vehicle, drive through, park, return to the gate to close it and then continue on their way. As well as being a tedious process there is a risk that livestock may escape whilst the gate is open and the farmer is in his vehicle.

Jim Alston, a Norfolk based farmer, had been frustrated by this process for some time and initially came up with the idea of an electrified, flexible grid installed at the field entrance. However, after initial trials this approach was abandoned and Jim returned to the idea of improving the functionality and capability of the farm gate. 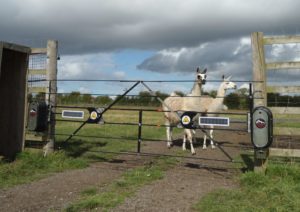 Working with colleague, Oliver Chastney, an expert in 3D CAD and engineering design, the pair explored various gate and barrier options, finally settling on a gate that could close within five seconds, moved within an animal’s field of vision, could operate on a standalone basis and was robust enough to cope with knocks from passing farm vehicles or lively farm stock. Finally, it had to be remotely controlled.

Having been disappointed by a previous supplier, the Dofygate (Driver Operated Field and Yard Gate) team searched the Internet for an alternative solution and, in 2013 came across, Newbury Innovation who, after a series of face to face meetings and quotes for different elements of the work, were appointed.

Jon Hawkins, director of Newbury Innovation, explains: “We were able to help Jim define the spec for this complex piece of electronics and were then able to develop the board that, ultimately, is the ‘brains’ inside the gate.”

One of the challenges was being able to generate a shock that was suitable for the control of the stock but at a very low power consumption. The solution was an energiser – ie a component within the gate that provides the electric shock that acts as the deterrent for the livestock. The functioning of the energiser was just one of the elements that had be incorporated onto the PCB. Newbury Innovation also engineered it so that the energiser had sufficient sensitivity to only emit the higher shocks to livestock and would not discharge unless the contact between the gate and the ground was at a specified level avoiding unnecessary shock cycles. 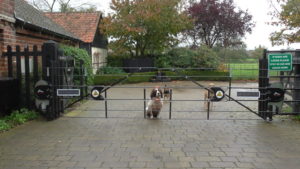 “Voltage tracking on the surface of the PCB was challenging. With the higher voltage being discharged there was every likelihood that it would jump the air gaps between the different circuits. The final board has circuits arranged in a unique format of width, shape and spacing that were determined following a robust testing procedure,” explained Jon.

Powering the energiser was one of the main challenges as those already on the market were designed to power long fences more than a kilometre in length and if that energy on a 3m gate the shock would be too strong. “If an animal were to receive too higher shock they would become scared not only of the gate but that entire area of the field, which would be a real problem when you came to move the livestock to a different area of the farm,” said Jim.

Whilst solar power had been deemed unsuitable on a stand-alone basis, it became clear after talking with Newbury Electronics that when used with a technique called detection/response it would be the solution they had been seeking. The Dofygate operates on around 0.5mA in contrast to a typical energiser that would use in the region of 20mA. The gate maintains a relatively low voltage of 100v until it detects something is touching and this then triggers the energise into putting out three much higher voltage bursts, each of around 4000v which is a sufficient deterrent for the stock. 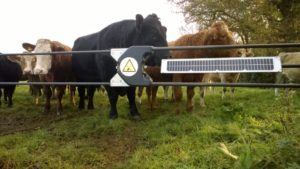 The final element was the design and production of the remote-control function, which includes a choice of fob, connected buttons or a mobile phone app. Launched initially to dairy farmers the gate, with its three key benefits of speed, ease of installation and portability, has been well received across the wider farming community. Not only that, but gates have also been deployed on construction sites, schools and for traffic control. Jim and his team are now looking at an updated version of the gate for use with the equine community.