Applications such as VR/AR and convertibles require higher graphics resolutions and frame rates, and emerging applications such as ADAS and machine intelligence require increased compute efficiency. Devices designed for these applications are often designed in sub-14nm process technologies. Furian addresses these needs through a multi-dimensional approach to performance scalability, with an extensible design and a focus on easy system integration and layout in the latest processes. With Furian, embedded products will be able to deliver high-resolution, immersive graphics content and data computation for sustained time periods within mobile power budgets. 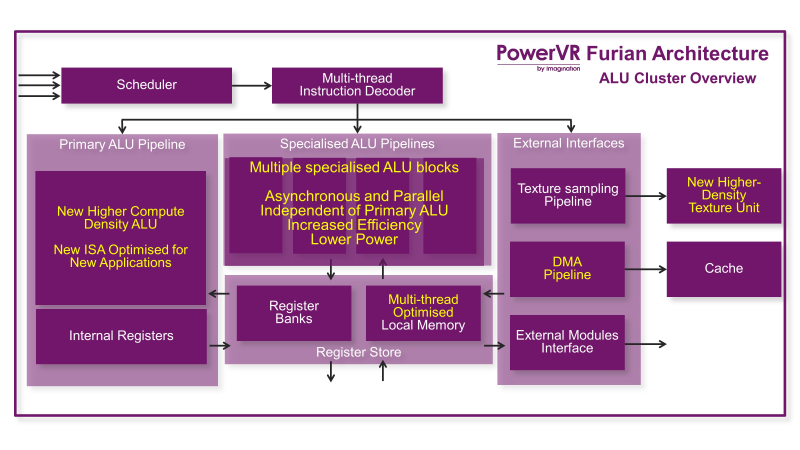 Furian’s architecture improvements are designed for enhanced power efficiency, widening the industry-leading performance per mW gap over competing solutions, with the benchmark already set by the PowerVR Rogue architecture. Going forward with both Furian and Rogue, Imagination will provide the industry’s most complete and efficient range of GPU IP cores across a wide range of performance operating points.

Sam Rosen, managing director and VP, video, OTT and AR/VR, ABI Research, said: “Emerging applications such as AR/VR and machine learning put intense new requirements on the GPU. For such applications, GPU systems must do more than in typical rendering scenarios, including a great deal of general purpose computation. It’s important to have a GPU microarchitecture that is adept at mixing graphics and compute workloads at different stages inside a single frame of rendering. With Furian, Imagination has leveraged its deep GPU expertise to create an architecture designed to fully deliver these next generation applications.”

Mark Dickinson, EVP PowerVR business unit, Imagination, commented: “We created Furian to address a new class of emerging applications, with a focus on efficient scalability that will extend to multiple generations of PowerVR IP cores. We’re excited to start rolling out the first 8XT IP cores based on Furian. These cores will further cement the leadership of PowerVR at the high end of mobile performance.” 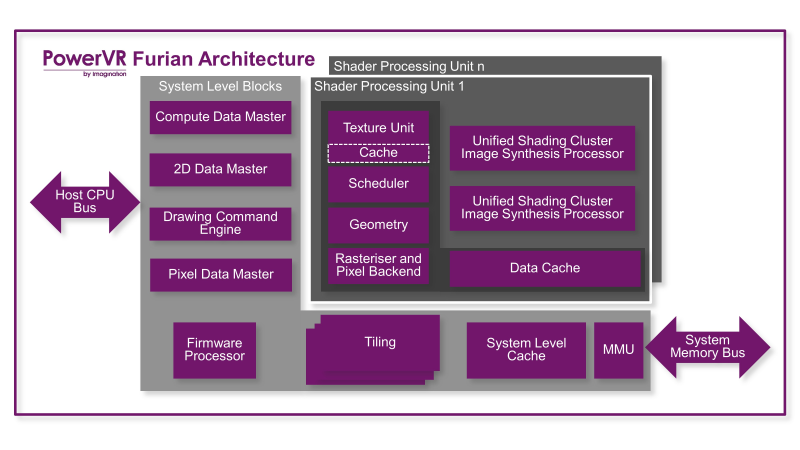 The Furian architecture incorporates many of the compelling features on which PowerVR has built its technology leadership. This includes Imagination’s Tile Based Deferred Rendering (TBDR), which has been proven over multiple generations of PowerVR GPUs to provide the most highly efficient embedded graphics.

Furian is designed for:

·      Multi-dimensional performance scalability: Designed to achieve the most efficient core utilisation and performance density via multiple approaches to scaling, Furian can address a wide range of markets and requirements. Different designs for low- and high-end IP cores prevent compromises in scalability.

·      Ease of SoC and system level integration: Furian is optimised for ease of layout in new sub-14nm processes, leading to reduced layout times and resources and enabling easier scaling to higher performance points.

·      Extensibility: Furian is designed to allow future function-specialised pipelines to be tightly integrated with the GPU to deliver functionality that may be too expensive or not feasible to implement on a CPU/GPU/DSP, such as ray tracing capability.

·      GPU compute: Furian is designed to address the increasing compute requirements across multiple applications and market segments with efficient use of compute APIs including OpenCL 2.0, Vulkan 1.0 and OpenVX 1.1*. Furian adds a bi-directional GPU/CPU coherent interface for efficient sharing of data; and a transition to user mode queues from kernel mode queues which reduces latency and CPU utilisation for compute operations.

Furian by the numbers

Improvements in performance density, GPU efficiency, and system efficiency lead to lower power and a better user experience for next-generation applications. Compared to Series7XT Plus GPUs in the same process technology and at same clock frequency for cores with similar silicon area budget, Furian achieves: