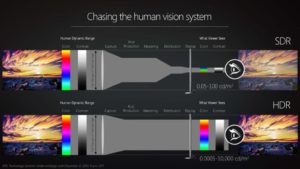 Resolution is the most obvious battleground on which rival TV and display manufacturers fight. Consumers have been willing to pay a premium for HD displays, and more recently for 4k displays. Eventually, ultra-high definition 8k displays are expected to supersede the current generation of high-end TVs. David Gamperl, produt manager, ams, tells us more

With the introduction of HDR (High Dynamic Range) displays, consumers are learning that contrast too has a strong impact on the viewing experience (see Figure 1). By providing a much greater contrast between the brightest light colours and the deepest, darkest blacks, an HDR display offers a richer, more exciting and more vivid viewing experience.

The development of new HDR displays, however, poses a power-system design problem for display manufacturers to solve: the requirement for high contrast calls for a very high-brightness backlight, able to reproduce extremely bright portions of an image faithfully. But the very high-current display circuit must also be dimmed down to extremely low levels to render the dark portions of the image correctly. At the same time, TV manufacturers must comply with stringent regulations and guidelines, such as the US Department of Energy’s ENERGY STAR programme, which strictly limits the average power consumption of a new TV.

Conventional PWM backlight dimming methods alone can achieve no better than a 1:1000 ratio between the highest and lowest current level. If implemented in a high-performance HDR display, a power controller IC with digital PWM dimming alone will result in wasted power and impaired picture quality. This is why a new approach to TV backlight power control is needed, to provide a wider spread between peak and minimum brightness levels, as well as to provide for granular local control of multiple segments of the display screen’s backlight.

Dolby, through its Dolby Vision initiative, was the first company to give the TV industry a high-profile demonstration of the way an HDR TV could perform. Its 2015 demonstration unit had a peak display brightness of 4000 nits. For comparison, today’s HD or 4K TVs typically have a peak brightness of around 300 nits. The dramatic increase in peak illuminance both enables the TV to reproduce very bright images faithfully, and extends the contrast between bright and dark displayed images.

The very large contrast ratio is both the factor which makes an HDR display so pleasing to watch, and which makes the power system design so difficult. This is because, in order to reproduce deep blue, black and grey colours correctly, the backlight needs to be dimmed down to very low levels. This means that if peak brightness is 4000 nits, and a conventional PWM controller can dim at best to 0.1 per cent, then the minimum display brightness is not low enough, and dark blacks will all be rendered as the same greyish colour. In practice, manufacturers of today’s HDR displays are therefore specifying a peak brightness of around 800-1000 nits, a compromise which provides for better rendering of very dark colours, but which blunts the appeal of HDR displays by reducing the vividness of the brightest colours.

The way in which the display is backlit affects contrast, as well as the dimming arrangement. Most TVs with LED backlights found in homes today are edge-lit, and implement global dimming. This means that, if most of the image is bright, the backlight for the whole display is driven at or close to full power, and if most of the image is dark, the backlight for the whole display is dimmed to a low level. Global dimming is therefore unsuitable for HDR displays, particularly because it handles badly the type of image shown in Figure 1, in which both bright and dark portions have to be displayed simultaneously.

This means that HDR technology calls for direct backlighting with local dimming – a backlight architecture which requires more individual LEDs, more LED channels and a more complex LED driving system. It is therefore more expensive. But by dividing the display’s backlighting system into segments – typically today between 16 and 256 in a direct-backlit 47” TV – the backlight brightness can be precisely matched to the content of the image shown in the small square display area served by each segment. Deep dark blues and bright whites can therefore be displayed simultaneously, with no power wasted on the backlighting of dark portions of the image.

This local dimming approach calls for the LED driver to be synchronised to the video or graphics processor (GPU). If the interface between the devices allows, the backlight driver may be directly controlled by the GPU. Local dimming is a feature enabled by use of the AS3824 LED backlight controller from ams. Figure 2 shows how a vertical sychronisation signal (VSYNC – a patented feature of ams LED controllers) may be used to mark the start of each new frame, providing a synchronisation input to a backlight controller. The diagram shows that, in frame 1, a bright image calls for a very high PWM duty cycle in segment 1, while segment n has a reduced PWM duty cycle because it is rendering a darker portion of the image. Then in frame 2, new video content means that the brightness of the segments must change. Instructions for new PWM duty cycles in segment 1 and segment n are sent by the GPU during frame 1, and the segments’ signals are refreshed with the rising edge of frame 2.

So multi-channel LED controllers such as the AS3824 – which provides individual control of 16 channels – enable granular local dimming of segments of a display. Up to 32 AS3824 ICs may be daisy-chained via their SPI interface to control displays with more than 16 segments. But manufacturers of HDR displays still face the problem of the contrast ratio. How can they increase peak brightness above 1000 nits while retaining the ability to render very dark colours?

The answer is a patented innovation introduced in the AS3824 controller IC: an analogue method for boosting the PWM-controlled current. This can boost the current controlled by the PWM signal by up to a factor of eight over its base level, to illuminate properly the brightest segments of an image. At the same time, the darkest channel could have an analogue LED current of just 10 per cent of its base value, turned on for the minimum PWM duty cycle – potentially as little as 0.1 per cent. In other words, the dynamic range of the digital PWM part of the dimming scheme is unchanged, but the additional analogue scale extends the total (analogue + digital) dynamic range.

Implementation of LED backlighting control with an AS3824 device provides for granular, multi-channel control of a direct backlit display screen, as well as an analogue + digital dimming range many times wider than that of a typical LED backlight controller using digital-only PWM dimming. The result is a dramatically improved contrast ratio to allow the reproduction of the brightest white colours in some segments of a display at the same time as rendering deep dark blues and greys in other segments, providing a viewing experience dramatically better than that in today’s HD and 4k TVs and displays. Plessey, an embedded technologies developer at the forefront of microLED technology for the AR and …