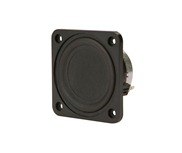 Launched in September 2012, the Boston Acoustics M Series consists of seven units; three floor-standing speakers, a two-way bookshelf model, a centre channel speaker, a satellite speaker and a powerful subwoofer. One of the keys to the enhanced performance and wide sonic dispersion of the M Series is the Balanced Mode Radiator (BMR), reported to be a favourite speaker technology of Ken Ishiwata, a brand ambassador for Boston Acoustics. Ishiwata is seen as one of the most influential people in the high-end audio industry and a crucial figure in the development of the CD. The BMR is utilised in the MSurround and the MCenter products in the Boston M Series family.

Commenting Rainer Finck, head of Boston Acoustics’ European operations said: “The advantages of BMRs are twofold: they have much wider and regular dispersion characteristics; and they shift the crossover frequency all the way down to 400Hz so give a better voice quality. This is essential for modern soundtracks, which have more information on the surround tracks than was previously used.”

James Lewis, CEO of HiWave said: “HiWave’s range of BMRs are being adopted in a wide range of quality -audio systems and Boston is a testament to the audio quality delivered by these speaker drivers.”

The company’s balanced-mode radiators have an extended frequency response and wide directivity compared with conventional drive units. They combine the benefits of HiWave’s bending-wave technology and pistonic modes of operation and are ideally suited for compact audio applications that require a full-range, high performance acoustic solution.