Hitex (UK) Ltd, in partnership with Emtrion has announced that the QNX RTOS for the DIMM-MX53 processor module is now available. 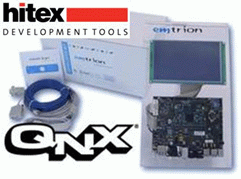 As part of their ECO System Hitex and Emtrion have partnered with Swiss QNX experts, Triadem Solutions, to produce the BSP for QNX 6.5. Previously QNX had been ported internally within Emtrion. However with them wanting to release at least 2 or 3 modules a year with support for QNX , Windows, Linux and Android software resources were being pushed to their limits.

This move means that the main package is developed externally but the ongoing support and development that customers typically require at the beginning of a project is not compromised. Hitex are able to pull on resources from Emtrion, Triadem and with a partner company in the UK to find a solution.

The DIMM modules from Emtrion are a scalable SOM solution that allows different modules with variable performance and features to be used on a common baseboard. Emtrion offer two baseboard designs.  One is designed to be used as a reference board for customers designing their own baseboard. The full schematics are available under NDA. The other is design to be used as a standard product and available for immediate production and inclusion in a customer’s overall system design.

The DIMM-MX53 module is a self-contained industrial processor module based on the i.MX53 processor from Freescale. The BSP for QNX 6.5 supports the main features of the module, including Ethernet, USB Host, UART, I2C, SPI, CANbus and displays. Additional features can be added on customer’s request.

The BSP is available in binary or source code forms, and is bundled with the Developer Kit, which contains a DIMM-MX53 module, baseboard and display. The system arrives assembled and ready for use.  Emtrion have now also announced a cheaper version of the kit without Display for those who are developing a headless system.

These are provided either with a kernel and corresponding SDK or as fully-mounted assemblies, depending on requirements and include hotline tickets to get you started, optional training and have extended support contracts available.

Emtrion already have plans for a DIMM-MX6 based on a quad core Cortex A9 processor later this year which again will be offered with the QNX BSP and next year a possible Cortex A15 and Cortex A5 have been discussed.

Hitex add extra value to the ECO System with software and hardware debug tools, middleware, software test utilities, performance analysers and years of know-how especially in the safety and CANbus arenas. Also in the past we have worked with Emtrion to adapter the starter kit to a customer’s request. We adapted the kit to change the display to the same display that the customer wanted to use in production and adapted the software to add a third party middleware stack. I have not heard of any other company offering this service at this stage of the development.

Hitex have experience of using these modules already for customer driven designs so we have designs which can be adapted to meet new customer requirements without starting from scratch. So we invite you to talk to us about your requirements because a lot of the time customers are surprised how similar their requirements are to an existing design.