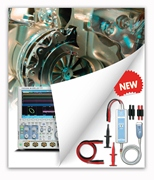 The new Yokogawa Model 701927 is a high-speed differential probe for high-voltage floating signal measurements using the company’s DLM2000 Series of mixed-signal oscilloscopes and other instruments equipped with the Yokogawa probe interface. The 701927 has a 3 dB bandwidth of DC to 150 MHz, and can measure differential or common-mode voltages up to ±1400 V (DC plus AC peak) or 1000 V RMS. For ease of use, the compact unit features automatic attenuation detection, and obtains its power supply via the Yokogawa probe interface. Input attenuation ratio is switchable between 1/50 and 1/500.

A one-metre long extension cable allowing the probe to be used in thermostatic chambers or for measurements on large or hot devices is included as standard. Even when this extension is used, a high bandwidth of 100 MHz is maintained

The new probe is ideally suited to the requirements of the mechatronics, automotive and power electronics sectors for testing devices such as motors, power supplies and invertors, and thus further extends Yokogawa’s ability to offer an extensive choice of solutions for testing in these sectors, including high-speed oscilloscopes, versatile and flexible ScopeCorders, and high-precision power analysers.