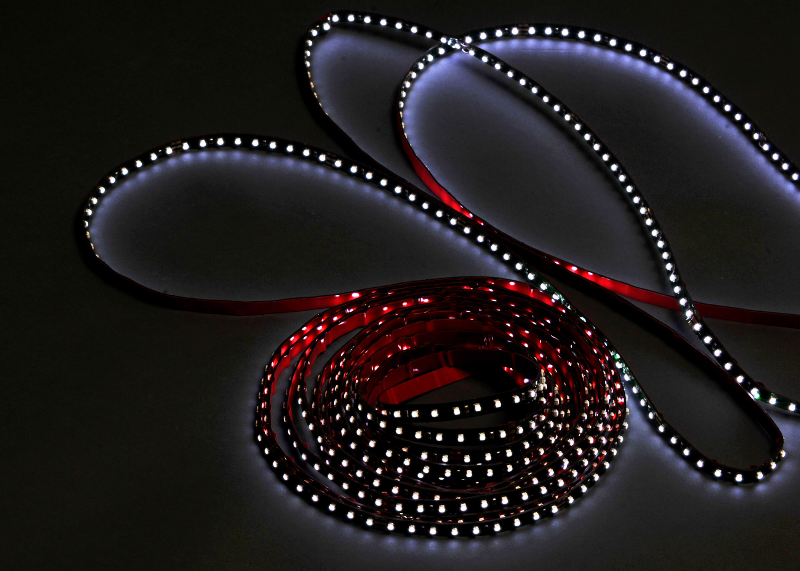 A high build-quality and very versatile range of flexible LED strips is available from OMC, the pioneer in LED lighting, backlighting and industrial fibre optic transmission. Unlike many LED lighting strips which are designed for relatively short-term, decorative use, OMC’s Flexistrip™ product uses closely spaced, ultra high brightness LEDs and incorporate a number of unique features that ensure long-lasting, bright and even illumination. Strips can be cut to length with scissors and fixed in place using the pre-fitted, high bonding adhesive foam tape backing.

Ideal for a wide range of industrial and sign-making applications, Flexistrip™ LED strips benefit from in-built electrostatic and reverse-polarity protection and an extra-thick copper substrate for enhanced reliability and longevity. Positive and negative connections to a low voltage supply power the strips, and a simple two-wire link can be used to carry power from one strip to the next. The very high number of LEDs per metre eliminates many of the most commonly seen problems with LED illumination – such as light and dark patches or ‘spottiness’ in a beam – and means stunningly bright, consistent illumination in a vast range of applications. For optimal reliability, the LEDs used in the construction of the Flexistrip™ range are bin-sorted very tightly, with voltage bins as narrow as +/- 0.05V. This crucial step, skipped by many strip designs on the market, results in all the LEDs on the Flexistrip™ being driven at the same drive current. Without it, some chains will draw more current than others and can be overdriven, causing groups of LEDs to fail over time. In addition, the bin sorting ensures consistency of brightness along the strip.

To enhance the range’s versatility further, OMC have developed two fundamental types of  Flexistrip™ – front-firing and side-firing. The front-firing Flexistrip™ features 90 ultrabright LEDs per metre, is 10.5mm wide and offers a beam angle of 120 degrees and the light is emitted from the flat face of the strip. Total strip height is very compact – only 3.6mm – and can be reduced further to 2.1mm if required by omitting the VHB foam tape backing. This popular strip type is ideal for wide angle applications such as lighting up vending machines and chiller cabinets, point-of-sale displays, illuminated furniture and lighting up lightboxes and built-up letter faces as an alternative to fluorescent or neon.

Side-firing Flexistrip™ benefits from 78 ultrabright LEDs per metre, is 12.5mm wide and has a unique elliptical beam profile. This 30 x 60 degree beam, emitted from the side of the strip face, enhances intensity transverse to the strip while achieving fast beam mixing between adjacent LEDs, making it ideal for edge-illumination, halo effects, directional applications and for firing light over a longer distance. Total strip height is 7.0mm, or only 5.5mm without the VHB tape. This strip type is also ideal for being recessed into a routed channel or groove such as in display boards or signals.

Due to their superior reliability when compared to “decorative” LED strips, in addition to signage and display applications, OMC’s Flexistrip™ series are also finding a variety of uses in the industrial sector, for example in illuminating workstations, CNC machinery and other industrial equipment. Both strip types are available in both 12V and 24V versions and in a wide range of colours, and the front-firing strip is also available in RGB.

More details can be found at www.omc-uk.com.