Latest research by Hughes Electronics and London Southbank University, the strategic alliance formed exclusively to investigate and mitigate sources of Passive InterModulation (PIM) in cellular networks, has found that humidity makes a significant contribution to PIM. The group who also developed the WaveWay connector system and an influential white paper that sheds new light on some unknown sources of PIM has found that humidity deposits a layer of salts and other airborne contaminants which interfere with ‘clean’ signal transit and have invented a novel way of dealing with it. 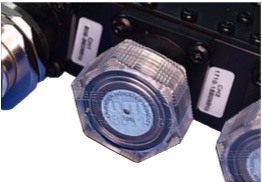 Hughes IP68 ingress prevention cap incorporates an ingenious built in humidity indicator that stops dust, grime, fluids and humidity in its tracks and alerts the user to the amount of humidity in the connector mating area

PIM is a series of resulting signal harmonics and distortions that emerge between two or more interacting signals when transmitted through passive components such as cables and connectors, causing unwanted interference and degradation of wireless communications. 4G, 5G and Future Generation Networks require stricter Signal to Noise Ratios (SNRs) and the issue of PIM must be addressed if cellular capacity is to be maintained.

Though almost impossible to see the salts deposited during the evaporation process are electrically conductive and play havoc with skin effect signal transmission, they instigate surrogate (signal) pathways, causing parallel path and harmonic signals and distortions, which are a root cause of PIM.

To counter the effect Hughes have designed an intelligent IP68 rated cap for connectors with a humidity indicator. The cap which protects open connector interfaces from mechanical damage,?dust and humidity is transparent and incorporates an ingenious blue indicator in the top of the cap that visibly turns to pink when it detects the presence of humidity. It is possible to determine the amount of humidity present by the shade of colour, instructional information is provided with each cap to help the user.

Approved by most major UK networks, the new device is economical to deploy and can save companies many wasted man hours of PIM diagnosis and expensive trial and error remedies tracking down sources of PIM they simply cannot see.

The screw on caps are rugged yet lightweight, no special tools are required, they are surprisingly economical to deploy yet can save companies many thousands of pounds in PIM diagnosis and lost revenue due to poor reception. They are available for industry standard 7/16 and 4.3/10 connectors.