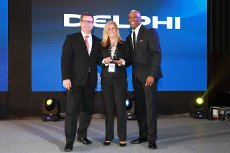 The Electronics Group of Henkel announced that it has received two 2014 Pinnacle Awards and one Above and Beyond Award from Delphi Automotive PLC – its prestigious supplier honors – during Delphi”s Global Supplier Conference & Pinnacle Awards event in Shanghai, China.

The awards recognised Henkel for its contribution to Delphi’s Excellence culture and commitment to quality, value and cost performance.

Chris Maksud, Henkel Global key account manager for Delphi, accepted the awards during a gala dinner at Hilton Hongqiao. “Henkel’s partnership with Delphi spans over 35 years and we are delighted that our work has been recognised with these incredible honors,” said Maksud. “Both our Salisbury, North Carolina, and Yantai, China, manufacturing facilities won Pinnacle Awards and our global team was honored with an Above and Beyond Award for its contributions to Delphi new business development. We are grateful for the long-standing relationship with Delphi.”

Delphi recognised 33 suppliers from 16 countries with its 2014 Pinnacle Award.

Henkel operates worldwide with leading brands and technologies in three business units: Laundry & Home Care, Beauty Care and Adhesive Technologies. Founded in 1876, Henkel holds globally leading market positions, both in the consumer and in the industrial businesses, with well-known brands such as Persil, Schwarzkopf and Loctite. Henkel employs almost 50,000 people and reported sales of €16.4bn and adjusted operating profit of €2.6bn in fiscal 2014. Henkel’s preferred shares are listed in the German stock index DAX.