Lechwerke (LEW), located in the city of Augsburg, has extended their “Energy Façade” project by integrating HeliaFilm, a solar film made by Heliatek. Over the next few years, the resulting test platform will be used to measure the output of the organic photovoltaic films in a direct comparison to conventional solar technology. The building has now been upgraded both energetically and visually by this BiOPV (Building Integrated Organic PhotoVoltaics) solution. 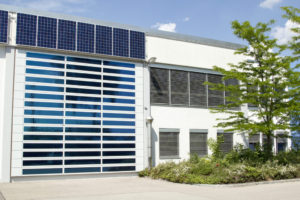 Building envelopes have already started to provide several functions. For industrial buildings, the energy efficiency retrofit is becoming more important. Energy suppliers like innogy SE wants to offer their customers the smart idea of generating power on the façade and simultaneously saving costs and contributing for climate protection. The Lechwerke AG, a regional energy supplier that belongs to innogy SE, is now evaluating several solar technologies. As part of the project “energy façade”, which has launched three years ago, two areas of their southern façade have now been equipped with SVK fibre cement elements covered by HeliaFilm. A total area of 56 m² with an installed capacity of 2.43 kWp is expected to deliver an estimated yield of about 2000 kWh per year.

The solar film HeliaFilm, developed and produced by Heliatek, offers significant advantages in terms of integration on existing commercial and industrial buildings. Through previous projects, Heliatek has demonstrated that existing buildings can be upgraded to this type of energy with far less effort and cost when compared to conventional PV modules. In contrast to those modules, Heliatek solar films are integrated directly into the building material at the factory of façade element producer SVK. They are then simply connected at the construction site.

The low weight of the films (1 kg/m2) allows for an easy and low-cost integration both on new and existing façades. Aesthetics also played an important role in the façade design at Lechwerke Augsburg. The HeliaFilm solar films set visually appealing accents, with a light background on bright fiber cement elements. While aesthetically pleasing, HeliaFilm reduces a building’s carbon footprint drastically by 20g of CO2 per generated kWh.

Thibaud Le Séguillon, Heliatek’s CEO, adds: “Energy production on the façade is our core focus. For us, the renovation market is one of the most important target markets. With innogy SE and SVK, we have long-term partners which will support us reaching into the B2B market. We look forward to establishing successful co-operations.”

LEW’s member of the board, Norbert Schürmann, says: “In the expansion of renewable energies, we are well ahead in our region. Photovoltaics play a central role. We offer our customers and our partners a comprehensive range of solutions. We test new, innovative technologies in practice. We are convinced that this pilot project will also provide valuable insights and new potentials for the future of photovoltaics.”

Carl-Ernst Giesting, head of B2B at innogy SE, adds: “In order to place a saleable product, in conjunction with Heliatek, in the coming years, we are now entering the next phase with customer trials. In concrete terms, we are working on simple concepts for assembly and electrical installation, which, in addition to higher yields and a resource-saving production, can be a further advantage over conventional photovoltaic technology.”