The debut of ROHM Semiconductor at the Hanover Trade Fair 2016: a look behind the scenes at the Japanese semiconductor manufacturer that offers forecasts on the industrial market, while at the same time identifying the goal that ROHM is pursuing with Industry 4.0 technologies – a double network for machines and organisations.

At the world’s pre-eminent industrial trade fair, the focus is on solutions for the digitalisation of factories and energy systems. And the central theme of Hannover Messe, “Integrated Industry – Discover Solutions”, fits perfectly with the initiatives of ROHM Semiconductor, who garnered appreciation from visitors and fellow exhibitors alike while offering up the latest in technological innovations at its booth in Hall 11. 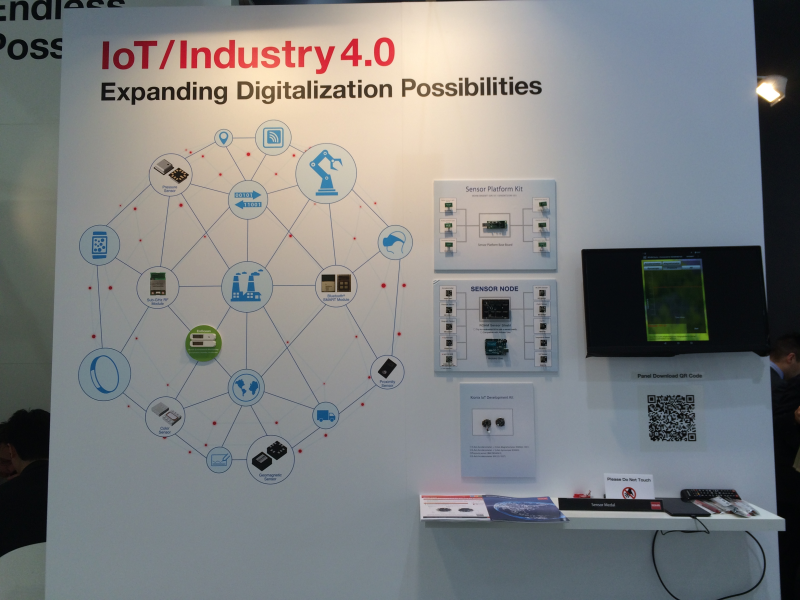 The motivation behind ROHM’s debut at the trade fair was to boost its European market presence and also to underscore the commitment of the Japanese semiconductor manufacturer to Industry 4.0 technologies. The age of network industries has long been under way for ROHM; i.e. in Japan, the fourth industrial revolution has been gaining great momentum with the industrial value chain initiative (IVI). This has been supported as well by the strong robotics tailwind, which represents something of a linchpin in the production technology of smart factories.

ROHM is driven to create value from a vision that it has of being able to coordinate and control all production and manufacturing steps over the internet, across borders and time zones for its customers as well as its own cycles. Especially relevant with focus at the Hannover Messe being on the digitalisation of industrial processes, the company presented at its own exhibition booth the “Internet of Things (IoT) Line of Approach”, based on concrete examples of applications of networked solutions for energy efficiency.

Also demonstrated were innovative sensor applications, which, combined with networks and data processing, have applications in cloud-based machine status and environmental monitoring. Such wireless sensor networks with optimised energy management are also the result of synergistic cooperation within the ROHM Group, which includes not only ROHM itself but also subsidiaries LAPIS Semiconductor, Powervation, SiCrystal AG and Kionix. Skills are bundled and technologies combined to create customer-specific solutions, such as a low-power wireless sensor network with integrated communication modules linked via mobile telephony, are clear signals for the market that pave the way to a smart factory.

Consistent with the company’s image, and within the competency of the SiC power module, ROHM presented a replica of the Venturi Formula E racing car. The demonstration vividly showed that, with properly dimensioned SiC technology, the performance of completely electric powertrains can be improved through better thermal efficiency and the optimised shifting speed of SiC components. As a result, the Venturi Formula E team will now be using ROHM-manufactured power electronics in its inverter technology. 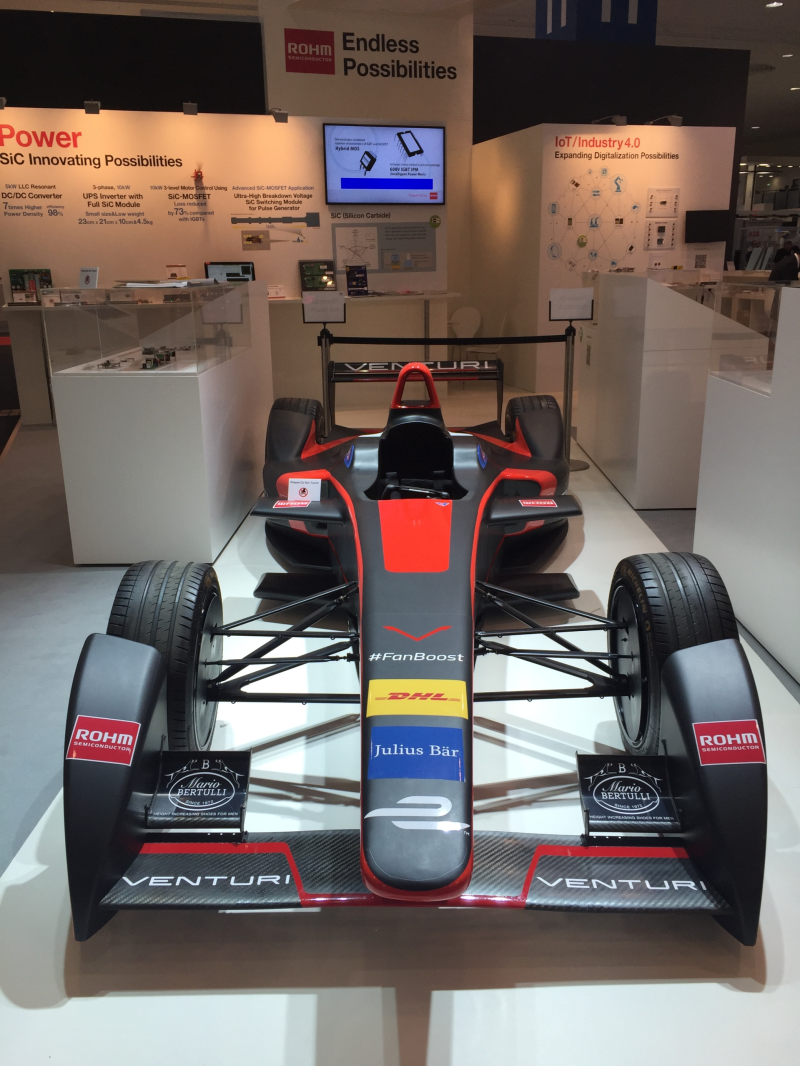 For the interested visitors at the trade fair, it appeared to be an insightful experience to see that both the design and dimensioning aspects are essential for getting the analog power components and the engineering correct. ROHM’s increased engagement in power solutions for robots and other production facilities was very well received, demonstrating everything from software engineering all the way to system integrators. Especially with regard to sustainable machine management in production, the sensor demonstrators at the booth offered ideal topics for discussion. In this context, of equal interest are the requirements of the automobile industry, which potentially further extends this technology’s range of application to the connected car and new mobility.

From ROHM’s viewpoint, Industry 4.0 is not a new concept, but rather the logical consequence of the development and emergence of subsystems. The new challenge centres on the integration and optimisation of systems and processes. And it is precisely this that serves as motivation for ROHM to enhance its presence in the German market – and subsequently the European market more broadly – as the company proceeds from its competencies in the semiconductor industry to develop services that benefit the needs of the market.

It is therefore of overriding importance to create so-called “smart factory services” and to focus on issues of integration, digitalisation and optimisation of processes. This, in turn, opens up entirely different perspectives on the development of business models based on Industry 4.0, or IoT, to both current and prospective customers.

With this, there are three clear goals for ROHM: to be in dialog with component manufacturers, system integrators and mechanical engineers; to attempt to ascertain their market needs and then to provide solutions through ROHM’s own capacities; and to use the boom in digitalisation to significantly reduce machine failures, to optimise processes and to thereby reduce energy costs – all roads that lead to ROHM.