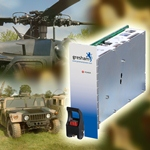 Fully compliant to the PICMG 2.11 Power Interface Specification the AC 3U 300R provides 300W maximum power in standard 3U x 8HP shelf space with interconnection via a Positronic 47 pin connector. The new cPCI power supplies are also hot-swap and parallel redundant enabled. Extra-high power density allows up to 40A to be drawn from the +3.3VDC output and 30A from the +5VDC output at 55ºC.

The new power supplies are industry standard size, 3U x 8HP, and have the customary +5VDC, +3.3VDC and +/-12VDC outputs. The AC input model has a universal input from 90–264VAC and active power factor correction.

According to Gresham very high efficiency and power density have been achieved by employing independent parallel converter topology and state of the art synchronous rectification, low profile magnetics and a high degree of surface mount assembly.