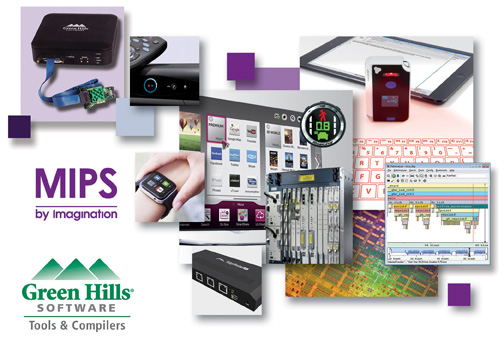 The on-going partnership between the two companies will bring support to new and future MIPS CPU cores and architectures. Joint customers will benefit from the collaboration between Imagination and Green Hills Software, as they increase support for Imagination’s IP. This year, Green Hills Software will be adding support for the new Imagination 64-bit MIPS I6400 cores, and anticipates these products to be well received in markets such as storage, networking, digital entertainment, and consumer electronics, as well as any other industry that requires the utmost in reliability and high-productivity tools.

“Since announcing a comprehensive new agreement with Imagination one year ago, we have made significant progress in our plan to support all MIPS architectures and cores,” said Tim Reed, vice president, Advanced Products, Green Hills Software. “We have customers evaluating the latest offering, and companies have already reduced code sizes significantly by using the Green Hills compiler to recompile existing code to microMIPS. Imagination’s MIPS CPUs combined with the Green Hills tools allows our joint customers to take full advantage of the unrivalled performance and code efficiency for this class of products in the creation of innovative, cost-effective solutions.”

“We are passionate about MIPS, and in continuing to build an even broader ecosystem in support of MIPS customers across a broad range of markets,” said Tony King-Smith, executive vice president, marketing at Imagination. “With its popular embedded development solutions, Green Hills is an important member of the MIPS ecosystem. They are also a strategic partner for Imagination, and we are delighted to work with them to help joint customers get to market quickly with differentiated MIPS-based products.”