General Micro Systems, Inc. (GMS) has announced that its SD19 rugged smart display is being deployed for use in modernising select U.S. Navy ships. This smart, all-in-one display will be distributed throughout the Navy’s fleet to replace an existing “dumb” display that had been facing end-of-life challenges. The award comes from a customer that turned to General Micro Systems (GMS) to combine two functions into one: a rugged, 19-inch LCD with special electrical, mechanical and environmental characteristics; and a rugged Intel-based single-board computer running Microsoft Windows. GMS met the specification requirements in all cases and units passed rigorous qualification testing.

From an RFQ first seen in 2013, the SD19 SmartView display system is now in the deployment phase. General Micro Systems has been awarded multi-year contracts to deliver tens of displays per ship, with volume of several dozen ships per year. 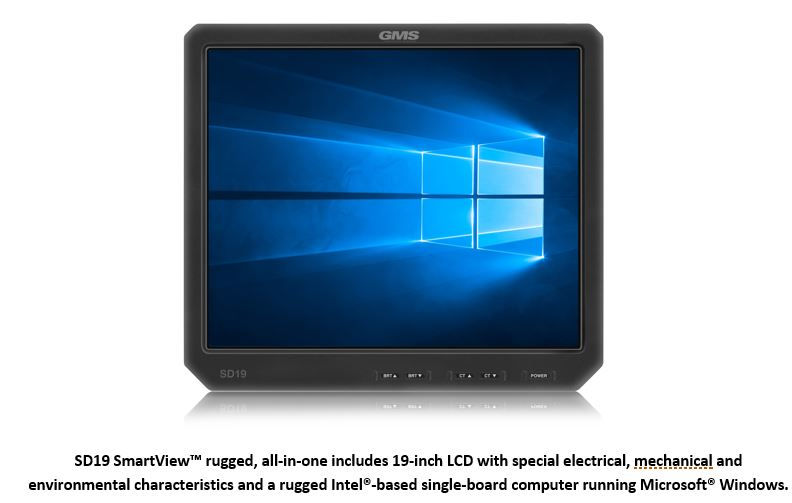 “Combined, all programs will exceed several million dollars in revenue to GMS per year,” said GMS CEO Ben Sharfi. “And it started with a long-time customer. They knew we were in the smart display business, and they knew we supplied VME-based single-board computers to the Navy’s fleet of ships.” Upon receipt of the system specification—which required not only backwards compatibility with the existing display but also incorporated a ship data-management computer function—GMS quoted a smart display system that combined multiple functions into one and was a fraction of the cost and thinner than competing products.

The technical challenge was maintaining one hundred per cent backwards compatibility with the existing display system while still adding the complete computer subsystem within the same physical space. “The other guys were over 8-inches thick, used a technology that isn’t rugged, and required a fan,” said Sharfi. “We are around 3.5-inches thin, passively cooled and run circles around the other options.”

According to the U.S. Navy, programs such as the “AEGIS Modernisation Program (AMOD)…introduces computing system upgrades via the Advanced Capability Build (ACB) and Technology Insertion (TI) process for both cruisers and destroyers.” In that example, COTS computer systems are specified in the AEGIS Baseline 9 (BL 9) development effort. More upgrades are planned across the 84 ships in service with the AEGIS Weapons Systems installed (22 Cruisers and 62 Destroyers). Other Navy programs similarly specify COTS upgrades including the GMS SD19.

For the ships being equipped with GMS SD19 SmartView displays, many use multiple instances of the SD19 smart display system and are installed inside or out on deck, depending upon the ship’s configuration.

The GMS SD19 SmartView is thin and rugged due to the company’s patent-pending RuggedCool technology, which conducts the heat from the Intel 4th Generation Core i7 processor (Haswell) directly to the SD19 case where, depending upon the location in the ship, the heat is either radiated into the environment or conducted away from the SD19 unit. This innovative cooling technology alleviates the need for cooling fans, which are a reliability weakness.

The SD19 SmartView smart display has a hardened 4:3 aspect ratio touchscreen and night vision-capable LCD, with finely controlled, Navy-specified brightness settings from full-on to complete dimmed darkness. Other unique requirements for SD19 include multi-display operation that allows the SD19 to output to other shipboard displays, while other displays can output to SD19 simply with a bezel button push.

The SD19 has been proven to pass the “hammer test” per MIL-STD-901D, which simulates a projectile striking the ship while the ship’s systems must continue to operate. As the video below shows, the SD19 SmartView unit withstood well over 100G in all three axes while operating and successfully passed the test.