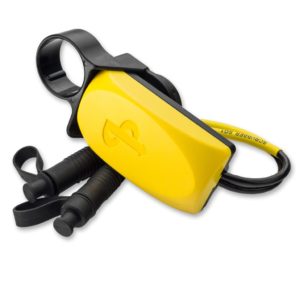 Recreational diving is enjoyed by people around the world and diving with rebreather equipment is booming. Rebreather technology recirculates the air, removes the CO2 and tops up the oxygen level. As a result, a small tank of air and a small tank of oxygen is all that is needed, rather than big tanks of compressed air. Divers can dive safely to depths previously thought only possible by commercial divers and dives can also last much longer – several hours on one rebreather dive rather than 30 minutes or so on a scuba dive with compressed air. Rebreather diving can therefore be much more fun and productive. There are no bubbles to disturb the fish allowing photographers, filmmakers and marine biologists to get closer to the marine life than ever before.

One limitation is the CO2 removal. This is done chemically by passing the exhaled gas through a scrubber containing soda lime but, of course, this has a finite absorption capability and therein lies the “rub”. The capability of the scrubber depends on the user refilling with the correct soda lime at the correct time and unfortunately it has been known for users to get it fatally wrong. One of the pioneering manufacturers of rebreathers, AP Diving, has addressed this problem with a custom CO2 sensor developed by Gas Sensing Solutions.

There are very tight regulations requiring rebreather manufacturers and suppliers to test and specify the brand of soda lime that must be used in their rebreathers in order to give a guaranteed, safe total usage time per charge of soda lime. The difficulty is the ability of the soda lime to absorb CO2 varies with water temperature, diver’s work rate and the diver’s depth, and these factors interact so it is only possible to predict a safe duration using conservative values. Divers, believing that this time is a worst-case scenario with a high safety margin, sometimes push the limits. 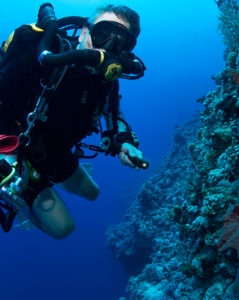 The trouble with increased levels of CO2 is that the diver cannot detect it by smell or any other sense. For some people, the body automatically increases the breathing rate as a reflex to try and remove CO2, but unfortunately it goes unnoticed in others. The next stage of increasing CO2 levels is a narcotic effect – so the diver stops thinking about the details of the dive time and can run into problems including losing consciousness.

The solution that has been developed by AP Diving and GSS is to fit the rebreather with a CO2 sensor unit. This gives a vital – and potentially life-saving – early warning of a rise in CO2 levels.  GSS CO2 sensors are the only ones that can be run off batteries, which makes this solution for diving rebreathers possible. In this case, the GSS ultra-low power, CozIR Wide Range CO2 sensor is used.

“Diving is a very challenging environment for a CO2 sensor as it has to cope with large changes in temperature,” explained Calum MacGregor, GSS’ CEO. “Fortunately, our LED-based designs have self-correction for temperature changes built in. However, the real challenge was preventing water ingress to the device and coping with humidity in the breath so that it did not condense on the optics and form droplets that would interfere with readings. We often produce custom versions of our sensors to meet challenging applications and indeed worked with AP Diving to produce a special version of our CozIR Wide Range CO2 sensor. The sensor is part potted to prevent water ingress to the electronics, and includes a desiccant to absorb water in the breath before it gets to the sensor’s optical cavity. It also has a special hydrophobic coating on the optics that we developed to further negate the effects of any humidity.”

Martin Parker, AP Diving’s managing director, explained: “We have been trialling this new design for over a year. It is working perfectly and we are doing a major push to educate people about how important and life saving it is to have a CO2 sensor in a rebreather. We have designed the sensor into a “Plug and Play” unit so that it can be retrofitted to any of our Inspiration rebreathers with Vision electronics that were made as far back as 2005. Not only is it a safety feature, but it also has a major benefit for divers. Now they can use virtually any brand of “diving” soda lime in their rebreathers, as opposed to just the brand that is specified, which can be challenging to obtain when travelling to different parts of the world. In addition, if they should push past the recommended usage times, they have the added safety of an appropriate CO2 warning system.” 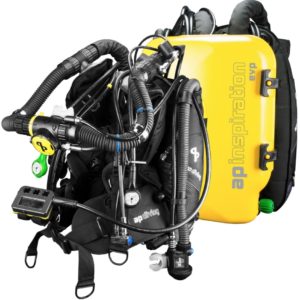 The GSS sensor has many technical advantages. It uses very little power and it turns on almost instantly so that it can be incorporated in the normal start up sequence of battery and component tests. In addition, it also measures the partial pressure of CO2 to give warnings as low as 3 mbar – which is only 0.025 per cent at 100m.

Martin Parker’s expertise in this area is such that he is occasionally called as an expert in cases of diving fatalities including the use of rebreathers. “Over the past 20 years, I have seen a number of incidents where the diver simply over-used the soda lime and some where the wrong soda lime was used, including cases where slow reacting soda limes, which are designed for low metabolic scenarios in medical applications, were incorrectly used and could not remove the CO2 fast enough. Having a built-in CO2 sensor provides complete peace of mind so that people can enjoy diving without worrying about the time left for the soda lime charge or whether the soda lime is working properly. It’s a system that the diver can test pre-dive and will cause the alarm to activate if the diver makes a mistake assembling the rebreather.”

CO2 sensors work by measuring how much light is absorbed by CO2 molecules in the 4.2 and 4.4 microns range as it passes through the sample gases, which is called Non-Dispersive Infra Red (NDIR) absorption. The amount absorption indicates how much CO2 is present. GSS developed LEDs that are specifically tuned to emit at these wavelengths. These LEDs use very little power and turn on almost instantly, enabling sensor readings to be made in less than a second. As a result, GSS CO2 sensors are the only NDIR CO2 sensors that can be powered by batteries. Competitor sensors use IR sources that require significantly more power per measurement and also take much longer to reach a stable condition for a measurement so that they need to be mains powered.