Fulham’s Light+Building Bluetooth mesh demonstration will include a Bluetooth to 0-10V LED controller and a 40W LED driver with add-on Bluetooth connectivity via a Fulham Intelligent Wireless Module. Both products will be used to control third-party sensors and wall switches, showing the promise of Bluetooth Mesh compatibility. These are some of the very first wireless LED controllers to provide two-way Bluetooth communications, enabling control commands and commissioning as well as data gathering for performance monitoring and analytics. 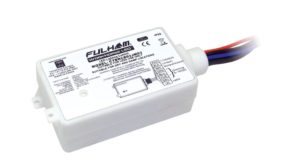 Bluetooth mesh can be used to enable a wireless lighting management ecosystem that can quickly pay for itself, as well as laying the foundation for centralised lighting controls as the foundation for IoT (the Internet of Things). ABI Research predicts there will be 48 billion Internet-enabled devices installed by 2021, including smart luminaires, and open standards such as Bluetooth mesh will make it possible to consolidate these devices into an IoT infrastructure. Fulham is demonstrating a prototype app that shows how sensors in luminaires can be used for additional IoT functions such as managing HVAC, alarm systems, emergency exit signs, and smart door lock controls.

Adopting Bluetooth mesh for wireless lighting controls offers a number of advantages since Bluetooth is a well-defined, open standard that promises fast, reliable performance and scalability. Mesh networking was designed for applications such as building automation, supporting many-to-many communications, and it is ideally suited for connected lighting since it can simultaneously connect sensors in hundreds to thousands of luminaires.

Fulham also will display a new PoE Linear LED Engine technology, which can be integrated into a variety of form-factors . Unlike previous generations of PoE products that can only issue commands via a 0-10v interface, the PoE LED Engine connects directly to the LED light module, providing complete two-way communication with the fixture to gather data about luminaire performance, power consumption, and operating temperature, as well as issuing commands such as on/off, diming, colour tuning and timed scheduling.

Using PoE to power LED luminaires simplifies installation, since only one cable is needed for both power and controls. PoE provides the LED luminaries with a low-voltage DC power source providing up to 52W of power. This makes the luminaire more energy efficient and less costly since no conversion drivers are required.

PoE also allows makes it easier to accommodate high bandwidth sensors such as IP cameras in the same network infrastructure used to power and control lighting. With PoE, each LED luminaire has a unique IP address, making it easy to add lighting to an IoT infrastructure, including remote management over the Internet.

“We have been developing clever LED products with integrated programmability for some time. The next step toward smart lighting is to add communications to programmability, and our technology demonstrations at Light+Building will highlight some of the possibilities offered networked lighting ecosystems,” said Russ Sharer, vice president of Global Marketing and Business Development for Fulham. “In addition to providing two-way communications for both control and data gathering, using open standards such as Bluetooth Mesh and Power over Ethernet to connect luminaires paves the way for IoT integration. LED lighting with built-in sensors creates an ideal framework for IoT infrastructure. These technologies have been requested many times by our OEMs, and we are excited to share their status.”