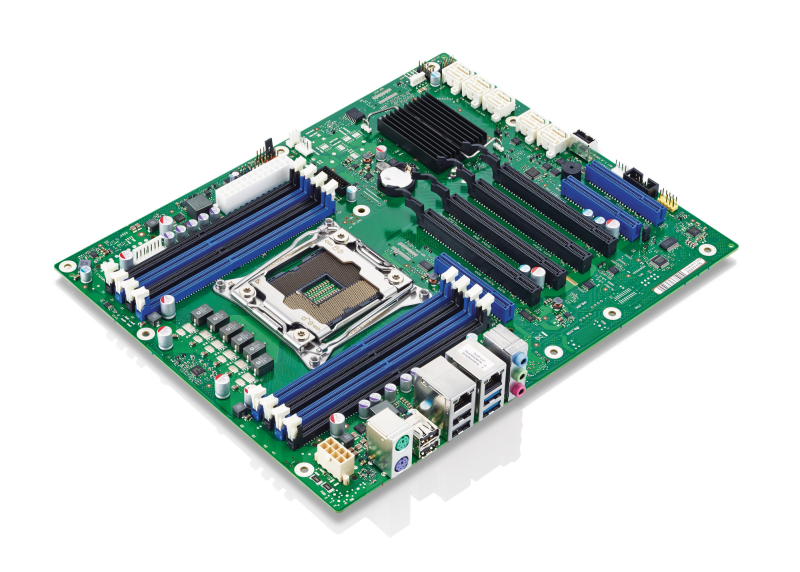 The industrial-grade ATX mainboard D3348-B is the main new product Fujitsu will focus on at the Embedded World fair in Nuremberg, Germany, from February 24th to 26th, 2015 (hall 2, booth 110). The mainboard is available with Intel processors from the Xeon E5-2xx [V3], Xeon E5-16xx [V3], and Core i7 58xx/59xx series. Thanks to DDR4 memory technology, it offers significant performance increases compared to previous generations. Unlike most of the comparable mainboards in the market, it is not based on the X99 chipset, but the C612 chipset by Intel.

The C612 chipset is particularly suitable for industrial applications because it supports Intel Standard Manageability and Intel vPro technology for remote management as well as Trusted Execution Technology (TXT). Furthermore, the chipset provides optimised support for Xeon processors and ECC memory. Long-term availability of the Fujitsu D3348-B mainboard, an aspect of particular importance for embedded applications, is ensured by the fact that the C612 chipset is likely to remain available until 2021. The X99 chipset, on the other hand, is expected to be discontinued in 2016.

By using solid capacitors, Fujitsu can specify the D3348-B for a service life of 45,000 hours in 24/7 continuous operation. In tests carried out by Fujitsu, comparable products with aluminium capacitors only reached a service life of 12,000 hours. Another factor contributing to the long service life of the Fujitsu board is the smart design of the board. The low total number of components employed on the board and the use of high-efficiency voltage transformers also reduce heat generation, thus improving service conditions.

Despite a significant increase in computing performance, the Fujitsu D3348-B is specified with a Thermal Design Power (TDP) of 160 watts, which is only about 10 watts higher than that of the previous model D3128-B. Furthermore, the Fujitsu D3348-B offers extended design options for integrating additional components. It features four PCIe x16 and three PCIe x8 slots, four USB 3.0, nine USB 2.0, and ten SATA(600) ports. The basic layout of the new extended-lifecycle mainboards, however, is largely based on that of the preceding generation. Thus, customers with industrial applications can also easily integrate the D3348-B into existing systems. As an optional component, Fujitsu offers the PCI x8 carrier board D3352 for M.2 SSD modules, which enable high-end data transmission rates and minimised boot times.

As with all their industrial mainboards, Fujitsu develop and manufacture the D3348-B at their Augsburg facility. As a result, users not only benefit from the Augsburg plant’s decades of experience in mainboard technology. In addition to the support provided by Fujitsu’s distributors, customers based in Europe can also get design-in support directly from the manufacturer in their own or a neighbouring time zone, if necessary.

Peter Hoser, sales director OEM, Fujitsu said, ‘Customers in the field of industrial automation who use the D3348-B not only benefit from the high performance of the mainboard and the specific advantages of the C612 chipset, but also from Fujitsu’s professional lifecycle management. Our customers receive a quarterly roadmap in which they can find out about design changes and product discontinuations at an early date. Any revision of the product is announced at least 3 months in advance so developers have enough time to take it into account.”