Technologies already exist to retrieve similar cases based on CT images for such diseases as early-stage lung cancer, in which abnormal shadows are concentrated in one place. For diffuse lung diseases like pneumonia, however, in which abnormal shadows are spread throughout the organ in all directions, it has been necessary for doctors to reconfirm three-dimensional similarities, increasing the time needed to reach a conclusion.

Now Fujitsu Laboratories has developed an AI-based technology that can accurately retrieve similar cases in which abnormal shadows have spread in three dimensions. The technology automatically separates the complex interior of the organ into areas through image analysis, and uses machine learning to recognise abnormal shadow candidates in each area. By dividing up the organ spatially into periphery, core, top, bottom, left and right, and focusing on the spread of the abnormal shadows in each area, it becomes possible to view things in the same way doctors do when determining similarities for diagnosis. In joint research with Professor Kazuo Awai of the Department of Diagnostic Radiology, Institute and Graduate School of Biomedical Sciences, Hiroshima University, this technology was tested using real-world data, and the result was an accuracy rate of 85 per cent in the top five retrievals among correct answers predetermined by doctors. This technology is expected to lead to increased efficiency in diagnostic tasks for doctors, and could reduce the time required to identify the correct diagnosis for cases in which identification previously took a great deal of time.

Going forward, Fujitsu Laboratories will conduct numerous field trials using CT images for a variety of cases, while additionally aiming to contribute to the increased efficiency of medical care by deploying this technology with related solutions from Fujitsu Limited.

Details of this technology will be announced at the Pattern Recognition and Media Understanding (PRMU) conference to be held by the Institute of Electronics, Information and Communication Engineers at Tohoku University (Sendai, Miyagi prefecture) on June 22-23.

The number of images produced in imaging inspections for detecting diseases using CTs is increasing with the growing sophistication of imaging equipment, making an ever-increasing workload for doctors. This is particularly true because a significant percentage of the number of chest CT inspections consist of those for a group of diseases called diffuse lung diseases, in which abnormal shadows spread across the whole of the lungs, including numerous diseases such as interstitial pneumonia and emphysema. The interpretation and diagnosis based on these CT images requires a great deal of knowledge and experience, as well as a significant amount of time, and has become an issue for doctors. This has created demand for a technology that retrieves similar cases from the past with diagnosis and treatment information that can serve as a reference in the doctor’s decision making, in order to improve the efficiency of interpretation and diagnosis.

There are existing technologies that allow a doctor to specify an area of focus in a certain slice image, and retrieve other patients with similar slice images. These technologies have been useful when the abnormal shadows are concentrated in one place, as with early-stage lung cancer. In the case of diffuse lung diseases, however, in which the abnormal shadows are spread in all directions across the organ as a whole, retrievals employing this method could find cases that while appearing similar in certain slice images, would not necessarily look the same in three dimensions. To rule out such cases, doctors had to re-check the results to ensure their similarity in three dimensions, taking up a great deal of time (Figure 1).

About the newly developed technology

Fujitsu Laboratories has focused on the way that doctors, when determining the similarity of images, divide the organ into three-dimensional areas, such as periphery, core, top, bottom, left and right, and how doctors look at the spread of abnormal shadows in each area. To be able to look at this problem in the same way as doctors, Fujitsu Laboratories developed AI-based technology that accurately retrieves CT images with a similar spread of abnormal shadows in three dimensions using image analysis to automatically separate the areas of the interior of the organ, where boundaries can be difficult to visually determine, and using machine learning to recognise abnormal shadow candidates in each area. As part of this, technology to recognise abnormal shadow candidates was jointly developed with Fujitsu R&D Centre, Co., Ltd.

Figure 2: How a doctor analyses images

With this technology, abnormal shadow candidates are first recognised from CT images using machine learning (Figure 3(a)). Next, by estimating the boundaries of the core and the periphery based on the relatively clear parts of the CT image in succession, the technology divides the lungs into core and peripheral areas (Figure 3(b)).

Next, following the axis of the body up and down, the technology creates histograms (Figure 3(c)) of the number of abnormal shadow candidates located in the core and peripheral areas, then looks at the three-dimensional spread of abnormal shadows to retrieve similar cases. 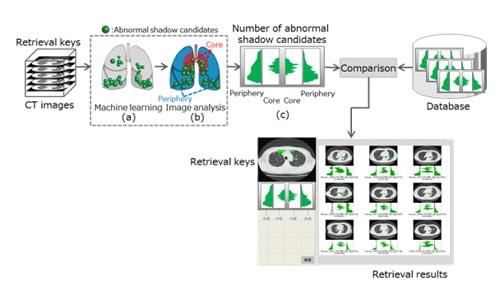 In joint research with Professor Kazuo Awai of the Department of Diagnostic Radiology, Institute and Graduate School of Biomedical Sciences, Hiroshima University, the results of evaluation experiments demonstrated that when this technology was tested using CT images of diffuse lung diseases, it was able to retrieve similar cases with an accuracy of about 85 per cent in the top five retrievals among correct answers determined by doctors. With this technology, it is expected that diagnostic tasks that doctors had previously performed by hand, such as searching for similar cases from literature, can become more efficient, with the possibility of shortening the diagnostic time required for a doctor to evaluate a case to as great as one-sixth of previous levels, for cases where evaluation took a great deal of time.

This technology could be applied not only to the diagnosis of diffuse lung diseases, but also to other imaging diagnostic techniques, including head CTs and stomach CTs, as well as MRIs (Magnetic Resonance Imaging) and ultrasounds. Fujitsu Laboratories will conduct numerous field trials using CT inspections for a variety of cases, while additionally aiming to contribute to the increased efficiency of medical care by deploying this technology with related solutions from Fujitsu Limited.

Professor Kazuo Awai, Department of Diagnostic Radiology, Institute and Graduate School of Biomedical Sciences, Hiroshima University, said: “The fact that we have been able to demonstrate the possibility of retrieving CT images where abnormal shadows have similar natures and three-dimensional distribution has important medical implications. Moving forward, this technology has the potential to provide doctors with clinically useful information by retrieving similar CT images from cases that were difficult to diagnose and treat, and we can anticipate that this will improve the accuracy and efficiency of medical care. By grouping morphologically similar images, and investigating whether there are any common genetic abnormalities within these groups, the technology may present new ways of thinking about diseases and offers the possibility of numerous clinical applications-it’s a technology that we have great expectations for in the future.”