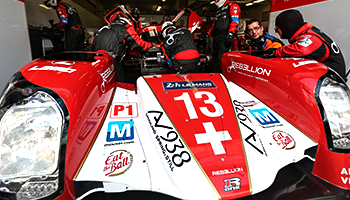 Mouser Electronics, the global authorised distributor with the newest semiconductors and electronic components, applauds the 2014 Rebellion Racing Team for another victory in Sao Paulo, Brazil last Sunday in the eighth and final round of the 2014 FIA World Endurance Championship.

The Mouser-sponsored Rebellion Racing team achieved an eighth LMP1-L win in as many races. Mouser is sponsoring the team in partnership with LEMO, a global company in the design and production of precision custom connection solutions. The team’s primary sponsor is Rebellion, a Swiss watchmaker. With a victory at the 6 Hours of Sao Paulo, the Mouser-sponsored team achieved a “full house” in the 2014 FIA World Endurance Championship. For their first year of racing in the FIA WEC, the R-One Toyota cars are undefeated in the LMP1-L class.  With seven class wins, seven class Pole positions, four 1-2 in class and a fourth place overall/first in class finish at Le Mans 24 Hours, the first chapter of the Rebellion R-One Toyota story ends on a high note.

The 6 Hours of Sao Paulo was a race full of drama. Both Rebellion R-One Toyotas overcame technical challenges in the end to finish 1-2 in the LMP1-L class.  “It was a thrilling end to a dramatic and exciting season,” said Todd McAtee, Mouser Electronics’ vice president Americas, business development. “Racing is all about speed and endurance, and racing sponsorships are a way for Mouser to communicate our performance-driven business model and promote the newest technologies and how they impact the high-tech world of auto racing. Every advanced, sophisticated component that goes into a race car is all about precision and gaining a performance edge out on the track. Car racing is the perfect vehicle to build top-of-mind awareness for Mouser and our manufacturers.”

Bart Hayden, the racing team manager, said the 2014 season was very challenging.  “The start of the season required a super-human effort from everyone to get the new cars ready and the reward for that came almost immediately when we finished fourth overall with the Rebellion R-One car at the 24 Hours of Le Mans. In Sao Paulo we had some technical issues, but we fixed them and kept our 100% record for the year of winning the LMP1-L class,” Hayden said. “It’s an achievement that the whole team can be proud of.”