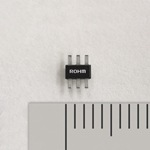 ROHM recently announced the development of the BU6904GF/NUX and BU6906GF/NUX fan motor drivers with built-in Hall element that have been designed for driving cooling fans in notebook PCs, tablets, and gaming systems. These new drivers are the first to include an digital AGC (Automatic Gain Control) function that contribute to not only greater miniaturization and lower power consumption, but reduced drive noise for silent operation.

The increasing complexity and speeds of electronic devices increase the demand and applicability of cooling fan motor drivers. However, due to motor characteristics such as signal detection accuracy it has become commonplace up to now to utilize a discrete 2-chip configuration consisting of a separate Hall IC and motor driver. But the trend towards decreased size and greater miniaturization requires smaller, thinner components and fewer external parts, making it necessary to develop a driver IC that integrates a Hall element.

In response, ROHM utilized CMOS processes and original circuit technology to minimize the chip size. In addition, the drivers, which incorporate a Hall element that eliminates the need for a separate Hall device, are equivalent in size and thickness with conventional Hall ICs, reducing mounting area considerably. An digital AGC function is included – an industry first, along with linear Hall signal detection combined with PWM soft switching drive minimizes Hall signal waveform fluctuations for improved circuit efficiency and noise characteristics.