For the European semiconductor industry, 2017 began with a dynamic start. According to DMASS Ltd., the quarter ended with a staggering 2.13 Billion Euro, 10.5% higher than the last record quarter, Q1/CY16. (Note to editors: DMASS claims a coverage of 80 to 85% of European Semiconductor DTAM.)

Georg Steinberger, chairman of DMASS: “The signals at last year’s end did not really point to such a dynamic growth. Our outlook for 2017 was actually rather modest, given that there were not too many growth signs in the major regions of Europe and considering the macro-economic dangers looming all around us. So, the record quarter came as a bit of a surprise. As to the reason, all industry segments seem to contribute, from Automotive to Industrial. The bookings are also quite strong, lead-times of various product families are moving out, prices are increasing. All in all, 2017 could bring a strong growth throughout the year.”

From a regional perspective, again Eastern Europe and countries like Israel, Russia and Turkey led the growth, followed by Iberia and some selected countries in the Nordic region. The most interesting country in Q1 was Poland, which has become the fifthlargest country in semiconductor distribution in Europe. Of the major regions, Germany grew below average, but UK, France and Italy remained in the low single-digits. In detail, Germany grew by 7.2% to 650 Million Euro, Italy by 2.2% to 205 Million Euro and France (+3.8% to 152 Million Euro) overtook the UK (+3.3% to 151 Million Euro). Nordic grew by 8.6% to 178 Million Euros. 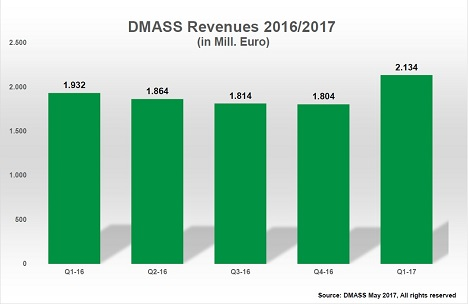 Georg Steinberger: “Eastern Europe’s strength is not surprising, given that the majority of the countries there act as lower-cost manufacturing region for Western Europe. The recent years have seen a huge production shift, predominantly from Germany, which explains why the growth in Germany has been rather moderate compared to the dynamics of its entire industry. Anyhow, over the next 12 to 18 months, we expect some serious channel shifts (distribution to direct, but also in the other direction) that could influence the overall development of the distribution market.”

Georg Steinberger: “One quarter does not prove a trend, so let us be cautious here with an interpretation. What is interesting, though, is that rising stars like LEDs or Programmable Logic have not participated in this overall upswing last quarter, despite the fact that these technologies appear in many industry segments. It remains to be seen how these fields develop over the course of the year.”