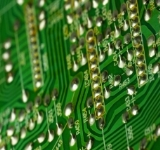 Given a boost by a healthy fourth quarter, the semiconductor distribution industry in Europe in 2013 saw annual growth reach 2.6%. According to DMASS (Distributors’ and Manufacturers’ Association of Semiconductor Specialists) sales in the fourth quarter of last year rose by 11.1% to 1.41 Billion Euro helping to lift the year as a whole to 5.87 Billion Euro. (DMASS only reports industrial semiconductor sales, defined as all semiconductors, excluding the PC channel.)

Reviewing the results Georg Steinberger, chairman of DMASS, said, “2013 turned out as predicted. After a disappointing and sluggish 2012, the return to normal growth came as a relief to the whole industry. Unfortunately, we experienced a further decline of average selling prices, as the over-proportional growth in volume confirms. On the positive side, very strong order books suggest that 2014 will be a healthy year (provided no major disasters occur).”

Looking at the regions, Germany grew by 11.5% to 433 Million Euro, and accounts for nearly 31% of DMASS Total. Italian distribution sales increased by a surprising 14.1% (to 130 Million Euro); France grew 17.9% to 109 Million Euro while the UK trailed the major regions of Europe with an increase of 8% to 121 Million Euro. Eastern Europe grew by 13%, the Nordic countries by 11.6% and Israel by 21%. The only countries/regions with a negative trend were the Baltic States, Russia and Hungary. On an annual basis, the main culprits for the slow overall growth were the UK, Germany and Russia, who all ended negatively.

“Looking at the full year, a strong South and a weak Centre would have been the last thing you expected, considering all the macro-economic news influencing the electronics market and subsequently the semiconductor industry. It is not quite clear what was driving the German weakness, but apparently it is behind us.” Explained Steinberger.

According to Steinberger, “Sequential quarterly developments show a very disparate and rarely consistent pattern, so let’s focus on the annual picture. All areas recovered nicely, except two major ones: Programmable Logic and MOS Micro, the latter one having only remained positive due to high-end MCUs. So what is wrong here? The conclusion we came to is the increased price pressure. We hope this pattern is going to change during 2014.”