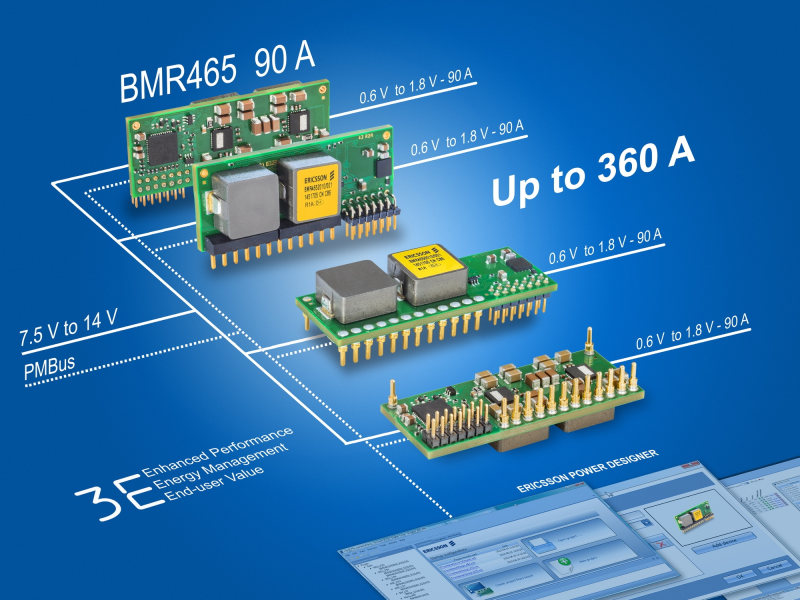 Ericsson has launched a new two-phase 90A 3E digital point-of-load (POL) DC/DC power module that offers compensation-free performance and the ability to easily connect modules in parallel to provide up to 360A to advanced network-processors that require high performance in power delivery and high levels of software control to improve flexibility. These advanced capabilities make the BMR465 ready for future Software-Defined Power Architecture (SDPA) systems, which power system architects foresee as the way forward to achieving highly efficient and energy-optimised network architectures by 2020.

The BMR465 POL converter can be operated as a standalone unit delivering 90A, as well as being part of a larger power system when processor boards require higher current. Built on a two-phase topology, four BMR465 modules can be connected in parallel together to deliver up to 360A. The BMR465 modules can become part of a multi-module and multiphase (up to eight-phase) power system that enables phase spreading, a reduction of peak current and also the amount of capacitors required by end systems.

The BMR465 is fully compliant with PMBus commands and has been integrated into the Ericsson Power Designer software, which makes it easy for systems architects to simulate and configure complete multi-module and multiphase systems prior to implementation and thereby gain valuable time-to-market.

Patrick Le Fèvre, marketing and communication director of Ericsson Power Modules, said: “The Software-Defined Power Architecture is being seen in the industry as the best way forward to optimise energy utilisation in data networks and make them more energy efficient. The optimisation of energy down to a granular level was at the origin of Ericsson’s digital power research, which was started in 2004. Now building upon a number of industry firsts in digital power, the BMR465 is the manifestation of our determination to support our customers today with technologies destined for the future. In addition, the BMR465 also complies with the new ‘teraAMP’ standard from the Architects of Modern Power (AMP) group of companies, which guarantees customers multiple sources of interoperable products.”

Operating from a 7.5V to 14V input, the BMR465 can operate over a large range of intermediate bus voltages from 8V to 14V, thereby complying with the Dynamic Bus Voltage scheme implemented in SDPA and reducing power dissipation and saving energy. The factory default output voltage is set to 1.2V, but can be adjusted from 0.6V to 1.8V either via a pin-strap resistor or PMBus commands. As part of SDPA, Adaptive Voltage Scaling (AVS) can also be performed via the PMBus, adjusting the BMR465 output voltage to the optimised core voltage as required by the processor.

Designed to power business-critical applications and high-density networking equipment, the BMR465 powertrain guarantees the highest efficiency and reliability and is built from the latest generation of power semiconductors. This enables the module to deliver an efficiency of 94.3% at half load at 12V input and 1.8V output, together with an MTBF of 14.95 million hours (based on Telcordia SR-332 Issue 2, Method 1.)

The BMR465 is available in two mechanical configurations with respective laydown and System-in-Package (SIP) dimensions of 50.8 x 19.05 x 10.0mm (2.0 x 0.75 x 0.39in) and 50.8 x 9.51 x 19.05 (2.0 x 0.37 x 0.75in). Both configurations share the same functional inputs and outputs, thereby simplifying board design when combining different packaging to accommodate different cooling methods. Shipped today in a through-hole mount version, a surface-mount version of the BMR465 will also be available in the near future.