If you were to tell your boss that a fifth of your output was being wasted and could not be accounted for, I doubt they would be too impressed. Where would you think the wasted output was coming from? Most managers would blame human error in their workforce, but they could be jumping to conclusions. Here, Keith Armstrong, global electromagnetic compatibility (EMC) expert at EMC Standards looks at a case where radio frequency interference (RFI) had a significant detrimental impact on a business. 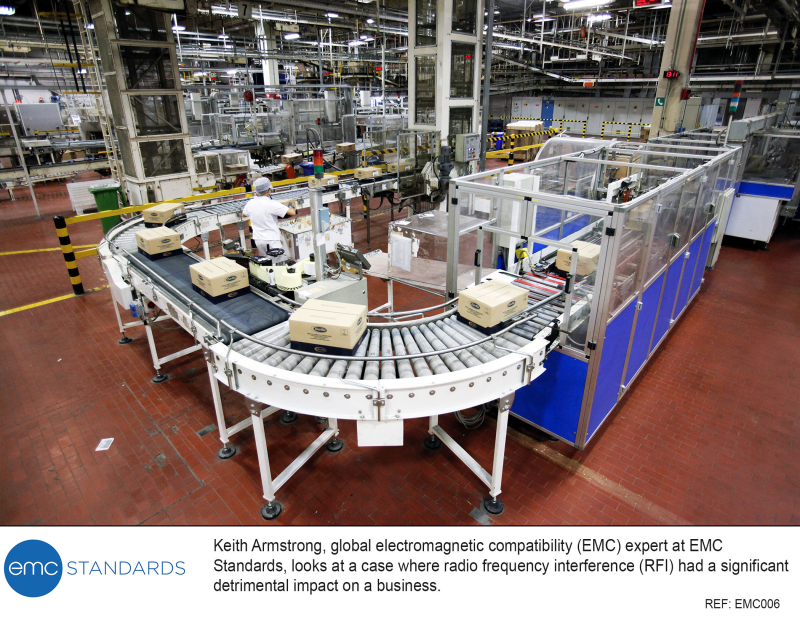 A large manufacturer of industrial fasteners, working in partnership with a major customer, agreed to install a packaging cell. This contained an automatic weighing machine that filled plastic packets with fasteners and a radio frequency (RF) welding machine, which sealed the packets. For financial reasons, the two machines were purchased separately, however the cost implications of this decision later became much more significant.

Both machines were supplied, installed and tested successfully. However, when the manufacturer used both machines at the same time, the weighing machine suffered more than a 25 per cent error rate caused by RF interference from the welding machine. This significant error translated into a substantial amount of wasted power output. In an eight-hour shift, the packaging cell should have packaged £20,000 worth of fasteners, however the automatic weighing machine was so inaccurate that it could have given away £4,000 worth of fasteners.

As the electromagnetic environment was not considered at the start of the procurement process, the facilities managers were not aware of the interference that would be caused by the RF welding machine. They also failed to specify EMC requirements in the contracts for both machines, stipulating only that they should meet all legal requirements. As this was not specific to EMC, the manufacturer could not complain to the suppliers about the loss caused by the RF interference.

It was only by bringing in expert technical assistance that the manufacturer was able to resolve the problem. However, by this point, it had lost six weeks production, suffered additional costs and had lost credibility with its major customer, which could have led to a loss of future sales.

This is only one example of where a business failed to consider EMC issues early in the design process and experienced a series of problems. Many facilities and plant managers are often unaware of the issues and regulations that surround EMC until it is too late and by then they have caused serious problems.

EMC Standards offers advice and resources for those who not only want to learn more about EMC, but those who need to learn more to protect the credibility and performance of their business. After all, it may be easy to blame human error for wasted output in a factory, but the human error could be yours for not considering EMC earlier in the process.