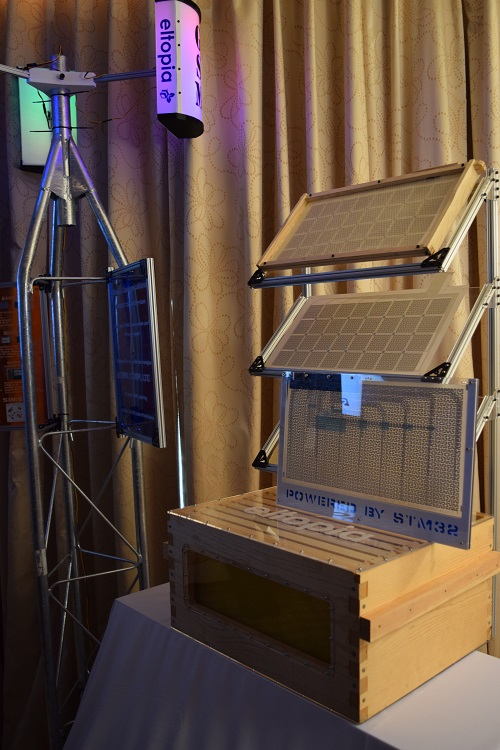 STMicroelectronics, a global semiconductor company serving customers across the spectrum of electronics applications, and Eltopia Communications, whose Innovation Space is dedicated to commercialising devices that address some of the world”s most pressing problems, announced that Eltopia’s Intelligent Foundation, codenamed MiteNot, uses an STM32F0 microcontroller,  multiple sensors, and power-management components from ST to monitor and collect data on environmental conditions and eliminate parasites that contribute to honeybee Colony Collapse Disorder (CCD).

Colony Collapse Disorder is a serious condition in which the worker bees in a hive disappear. As the bees in the estimated 4 million commercial hives are estimated by the US Department of Agriculture to pollinate about 30% of the food consumed by Americans, they also pollinate many of the crops eaten by livestock and have a similar role in global food production, declined bee populations are a serious threat to food sources worldwide. Apiologists—honeybee researchers–attribute CCD to multiple sources, including parasites, viruses, and pesticides. The primary parasitic suspects are mites, which infect and destroy honeybee colonies. Eltopia’s Intelligent Foundation is a compostable film that senses the lifecycle of the bees and parasites. The solution then interacts with the colony to apply targeted heat to sterilise the mites without harming the bees, and without pesticides. The low-power STM32F0 microcontroller and a broad range of additional ST sensors were selected by Eltopia engineers based on the components’ strong performance.

“Honey Bees are in danger and need our help. If we don’t act now, the integrity of our food supply is at risk,” said Will MacHugh, President, Eltopia Communications. “We work with a team of engineers, scientists, and vendors to tackle this important task, and ST is a strong partner that has provided us with more than a list of components; the team at ST have demonstrated a real commitment to the environment and represent more than a value proposition. They bring values.”

“We often say that ST is found everywhere microelectronics make a positive and innovative contribution to people’s life and now we can also say that is true for bees, which are vital to human survival,” said Luca Difalco, ?VP marketing and application, Smart Power and IoT, STMicroelectronics. “Eltopia’s commitment and focus on addressing Colony Collapse Disorder presented an important challenge that, with our portfolio of low-power MCUs and extensive range of sensors, made us uniquely qualified to address.”

Eltopia’s Intelligent Foundation is currently in research, development and testing. Eltopia is looking for commercial beekeepers and academic institutions to participate in additional testing, targeting market availability by fall 2015.