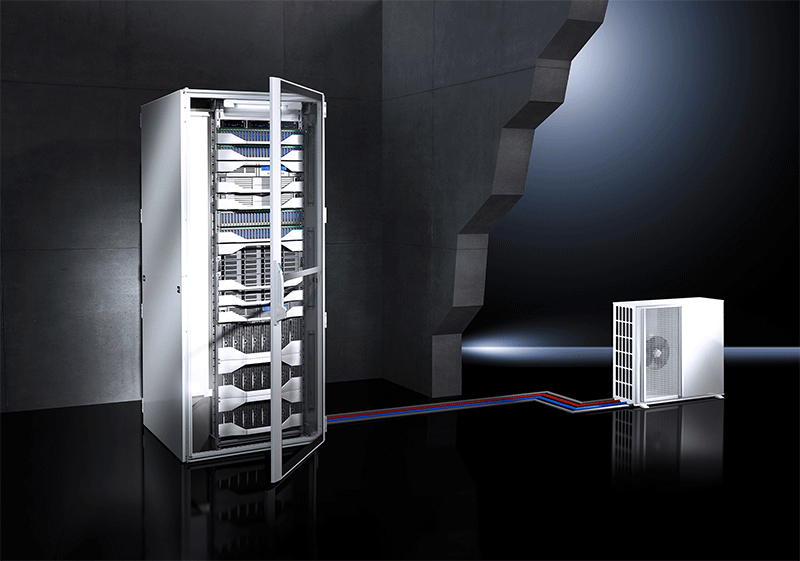 In today’s data-driven business models, even small companies have to contend with growing IT needs. When they expand their computing environments and install the latest class of servers, the issue of cooling the equipment becomes acute. Legacy air-cooling systems are no longer sufficient. The Rittal LCU DX and LCP DX solutions deliver enclosure-based cooling via direct expansion units. The units are easy to install simply by mounting them on the side panels inside IT racks.

Expanding a small-scale, air-cooled IT hardware environment to create a multi-enclosure facility often calls for a new cooling strategy. The first and most fundamental question is whether water-based or refrigerant-based cooling is more appropriate. It also makes sense to understand the total cost of ownership – including both capital expenditure and ongoing operating costs.

Direct expansion (DX) solutions for cooling IT equipment are the quickest and easiest solutions to implement and require less capital expenditure than water-based ones. DX solutions employ conventional refrigerant-based cooling with a split system and a compres-sor. Cooling is via a closed-loop refrigeration cycle, featuring an evaporator, a compressor, a condenser and an expansion valve.

Rittal’s LCU DX (Liquid Cooling Unit) offers enclosure-based cooling with DX units mounted inside 800 wide IT racks. They are available with up to 6.5 kW output in both single and dual redunacy variants.

The LCU system features horizontal air circulation, supporting the conventional method of front-to-back air flow to the 19-inch racks. Cold air is blown directly in front of the compo-nents. After being warmed by the servers, the air is drawn into the cooling unit at the rear of the enclosure and passes through the heat exchanger, which cools it down. This method requires IT enclosures that are sufficiently air-tight, such as Rittal’s TS IT series. Otherwise cold air will escape, impacting overall efficiency. LCU DX units are installable in 800-mm server enclosures.

The Rittal LCP DX (Liquid Cooling Package) is another example of a rack cooling unit. Suitable for 12 kW power dissipation, it can be mounted on the side of an IT enclosure, enabling a single device to cool two enclosures. One version of LCP DX blows cool air out to the front and can be employed to create solutions with a cold aisle that cools multiple IT racks.

By deploying state-of-the-art, modular and rack-based climate control systems, enterprises can remain flexible and responsive to changing IT needs – however uncertain – well into the future.