DSEI 2017: the most successful showcase of military technology, hub for international collaboration, and platform for the advancement of the Armed Forces

Defence and Security Equipment International (DSEI) is known to be the most comprehensive display of military technology. Described by the Secretary of State for Defence, Rt Hon Sir Michael Fallon as “a remarkably stable landmark in an otherwise turbulent world”, the most recent edition, held 12-15 September at ExCeL London, did not disappoint.

The buzzing exhibition halls welcomed 35,008 visitors, a three per cent rise since 2015, to see the 1,600 companies, while the dockside venue hosted a spectacular line up of seven visiting international warships. Not to be outdone by the naval sector, an impressive array of aircraft stationed at ExCeL’s East Terrace included a Chinook and a Black Hawk. The Land dimension was in full force, with armoured vehicles such as Rheinmetall’s ‘British by Birth’ 8×8 multi-role Boxer and its Leopard main battle tank among thosedrawing the crowds. 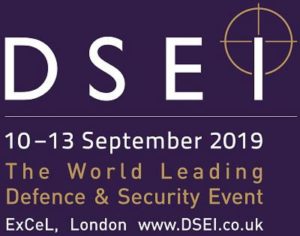 Rt Hon Tobias Ellwood MP, Minister for Defence People and Veterans, attended the inaugural People and Skills Day at DSEI to highlight how the UK MOD is tackling the challenge of recruiting and retaining personnel from “welders to cyber warriors”, while “adjusting to society’s changing expectations and the exponential advance of technology”.

This will be achieved by a three-pronged strategy including the creation of “new qualifications in export and International trade, a common industry and government career pathway and secondments to allow individuals to develop their skills and gain key experience across both industry and government”. The MOD, Mr Ellwood said, is also focused on increasing its number of apprenticeships to 50,000 and ensuring 15 per cent of the Armed Forces is made up by women by the year 2020.

Among the wide range of product launches on the exhibition floor, Saab used DSEI to unveil its Gripen Aggressor, which is used to act as an opposing force in advanced military combat training.

Swarm Systems’ stand featured its Owl 4 “Nano UAV” which can be carried in soldiers’ pockets and deployed to help them see around corners or over hills without exposing themselves to gunfire.

Dutch firm Delft Dynamics showcased its “DroneCatcher” counter UAS system for the first time at DSEI 2017. One of the only technologies of its type which can eliminate rogue drones by catching the threat in mid-air. Demonstrating the cross-sector appeal of DSEI, Dronecatcher is designed to support both military and commercial unmanned missions.

A key enabler for strategic cooperation across the international defence and security sector, DSEI welcomed visitors from 110 countries. In addition, military representatives from across Europe, Australia and Canada joined all four UK Service Chiefs to address the DSEI seminar audience.

The spirit of engagement and broad international collaboration that underpins DSEI is overarchingly reflected by the joint development of platforms such as the F35 Lightening II, which is produced by an international team of leading aerospace companies, the Ajax armoured fighting vehicle, and the Type 31E General Purpose Frigate.

The growing expertise in military healthcare was also in evidence at this edition of DSEI, primarily in the Medical Demonstration Area organised by the MOD’s Defence Medical Services (DMS). This trend was also reflected elsewhere on the exhibition floor by companies such as B3 Blackbox Biometrics; Bodytrak; and Equivital which manufacture revolutionary sensors for monitoring soldiers’ cardiovascular and thermoregulatory responses during intense activity or training, and even brain activity following blast exposure.

Speaking from DSEI, Tobias Ellwood described how “The scale of this event reflects the determination and the commitment Britain has to play our role on the international stage. We are living in uncertain times but there are a few nations who want to step forward to change our world as a force for good, and [the UK is] one of them”.

Rear Admiral Simon Williams, Chairman of DSEI organisers Clarion Defence & Security, said, “The support we are receiving from the UK Government is solid evidence of their commitment to the nation’s defence and security sectors. It is very pleasing that our industry’s performance and potential in key areas such as innovation, technology development and exports are being recognised in this way. DSEI will continue to deliver the ideal platform to see this partnership in action.”