The latest variant of the DOK-ING MV 4 rugged UGV is at the centre of the display on stand number N2-264 during DSEI taking place at the Excel Centre, London from 15 to 18 September 2015. This latest air mobile version is focused on operating in one of the most exacting military environments – Combat Engineering. 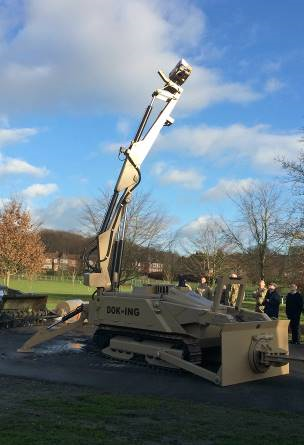 This MV 4 can be fitted with a range of tools and appliances to allow combat engineers to dig, lift, clear obstacles, roll, de-mine, clear IEDs, mark routes through obstacles and bulldoze some 1500m away from the control point. This keeps the operator out of harm’s way. At around 5t weight the unit can be moved by helicopter and is fully qualified by the US for helicopter, tactical air transport and parachute deployment.

Working with Lutra Associates, who have brought their considerable knowledge of CBRN to the company, DOK-ING will have experts in CBRN on hand to discuss their development work on a CBRN/Hazmat UGV capable of decontamination, reconnaissance sample collection and survey.

Tim Otter, Chief Executive of Lutra Associates, said, “Both the Combat Engineering and CBRN environments are hazardous and UGVs have a real potential to significantly reduce the risk to people carrying out these tasks,”

He added: “The DOK-ING MV4 has been purpose designed to operate in these types of environments and with the addition of specialist tools provides a great solution for combat engineering and CBRN across many tasks.”

DOK-ING’s existence originated from the realization that many dangerous, dull or dirty activities could be carried out by UGVs. Reducing the risk to humans, spurred this innovative Croatian company to look at what was possible. From this perspective the need to equip deployable forces and organizations such as disaster relief agencies with flexible and multi role equipments, as has recently been the case in the US, rather than bespoke systems, acted as a second strategic imperative