Do the Robot with the micro:bit Powered :MOVE Mini Buggy

Kitronik, a leading developer of electronics project kits and learning resources for schools, makers and coders has launched its latest micro:bit compatible product, the :MOVE Mini Buggy. To see the buggy in action, please click here.

Developed to coincide with the launch of the micro:bit in America later this month, the :MOVE Mini Buggy will spark the interest of people inspired by the BBC’s Robot Wars and support the thousands of children, teachers, makers and coders who have been getting to grips with the micro:bit since its launch in March 2016.

Building on its experience of working with over 3,000 UK secondary schools, Kitronik has designed the device to support learning across STEM subjects and produced associated learning resources to guide users of differing capabilities in the building of the :MOVE Mini Buggy. 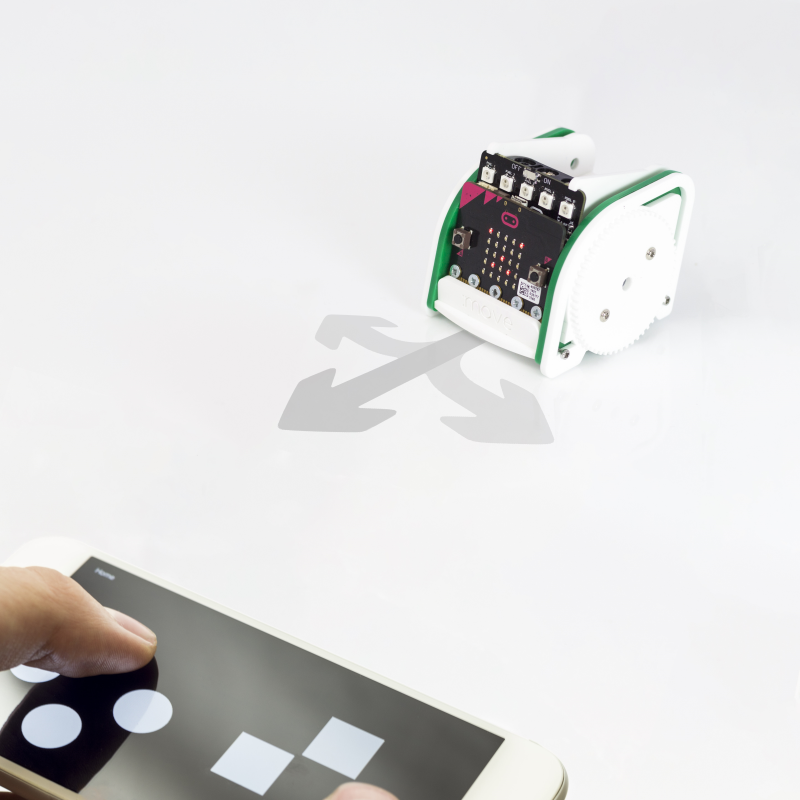 What is the :MOVE Mini Buggy?

The :MOVE Mini Buggy provides a very accessible introduction to robotics and has already generated a great deal of interest from teachers who had some hands-on experience at a recent Kitronik training event.

Users will be able to build and code their own two-wheeled robot which they can control remotely from their smartphones and tablets using Bluetooth via a free app called Bitty Game Controller.  The app was created specifically so that Bluetooth enabled devices could connect to the micro:bit.

The buggy can also be controlled using a second micro:bit as a controller using its built-in radio functionality. Autonomous operation is also possible, where the buggy can be coded to perform a series of movements, or turn around when it encounters another buggy.

Please click here to view a video of how easy it is to control the :Move Mini Buggy via the smartphone & tablet app.

Powered by two continuous rotation servo motors, the speed of the buggy can be controlled easily using Microsoft PXT Block Editor. The speed of these servos can be managed by simply altering the PWM (Pulse Width Modulation) signal to the servo, which is easy to do using the Servo blocks in the Microsoft PXT Block editor.  Kitronik have produced custom blocks for the Servo:Lite to make the task of coding as quick and painless as possible.

Additional extras can be added, such as a pen, which will increase the range of tasks for which the buggy can be used. Indicators and reverse lights can also be added using the 5 x RGB individually addressable ZIP LEDs (NeoPixel compatible).

Options such as these enable users to personalise the vehicle and give a sense of ownership. It also helps to expand the potential uses of the buggy for design and technology teachers, looking to use it as a foundation for further lessons.

The :MOVE Mini Buggy kit is also accompanied by excellent support resources and a wide range of tutorials. These show not only how to build and control the buggy but also how the Kitronik :MOVE servo:lite board can also be used in conjunction with a micro:bit to build other movement based projects.

Commenting on why Kitronik decided to produce the :Move Mini Buggy, Kitronik co-founder Kevin Spurr said: “We wanted to create a fun vehicle that young people could build themselves, and in doing so learn how to code and create. It is important that the enthusiasm for electronics, making and digital creativity sparked by the launch of the micro:bit is not lost and we hope that by developing projects such as these, children will continue to be fascinated by the potential of electronics and gain important skills and knowledge in a fun context.”

Along with companies including ARM, Samsung, Microsoft and Barclays, Kitronik has been involved in the development of the micro:bit project since the project began. With help from the BBC micro:bit partnership organisations, 2016 also saw approximately 1 million free micro:bits handed out to year 7 pupils in UK secondary schools.

Kitronik is now one of only two global wholesalers of the device for the Micro:bit Educational Foundation.

The launch of the :MOVE Mini Buggy demonstrates Kitronik’s ongoing commitment to create fun, innovative and motivating products which will promote enthusiasm for electronics and develop users confidence and skills in coding, design and technology and digital creativity. The buggy will assist teachers across the world in the delivery of lessons that capture the interest of their students in a meaningful context, using smart phones so loved by young people!

The :Move Mini Buggy is available to pre-order via the Kitronik website here. It will be available on general sale from Monday 26 June 2017. The micro:bit is sold separately.