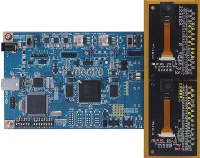 High-resolution image sensors have rapidly improved with the advancement of CMOS sensor technology. Along with it, image processing technology, typified by Extended Depth of Field (EDoF) and face recognition, have gained adoption in the industry. The usage has expanded not only for mobile phones and digital cameras, but also in the areas of navigation systems, factory automation, and intelligent transportation systems.

“One application of the SVI-06 is to provide the connection to two image sensors at the same time,” said Hiroshi Kokufu, President at Net Vision, “This can enable next-generation camera usage to reproduce what the human eye views. It can be used for simple 3D images, but it can also be used for much more detailed images, because human eyes can recognize complicated distances, complex dimensions, and shapes.”

The SVI-06 Image Recorder with Cypress EZ-USB FX3 USB 3.0 controller marks a major leap in performance. The data transfer of SVI-06 to a PC is about ten times faster compared to the SVI-03 USB 2.0 Image Recorder.

The EZ-USB FX3 is the industry’s only programmable USB 3.0 peripheral controller at present. Its on-chip ARM9 CPU core with 512 KB RAM delivers 200 MIPS of computational power. The FX3 is equipped with a fully configurable General Programmable Interface (GPIFII), which can be programmed in 8-, 16-, and 32-bit configurations. GPIF II enables FX3 to communicate directly to any processor, FPGAs, and image sensors and provides a data transfer rate at up to 400 Megabytes per second.