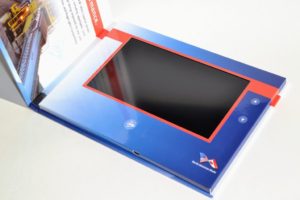 Adam Hazelwood, their CEO, stated, “The second generation of video brochures has arrived. Our customers can now update brochures already in the hands of their clients or users by uploading content over the internet using a desktop app'”.

This advance in technology expands the scope of video brochures beyond the traditional B2B marketing arena and into sectors such as training, education, customer communications and market research. Hazelwood went on the say “Not only is it environmentally sound to refresh content over the internet, it saves our clients a huge amount of money and opens doors to a broader audience.”

Traditional video brochures have been sold for around seven years. They come in a variety of LCD screen sizes and print formats with video content stored in the flash memory of the device and controlled using button icons located on the screen console. They are used mainly for reaching hard to find senior executives and influencers in the buying cycle.

The new WiFi enabled brochure has the functionality of the Android OS at its fingertips, the touch-screen acting as the user interface in the same way it does on a smart-phone or tablet. This evolves the product from an essentially dumb terminal to a bespoke communications device printed in the livery of the sponsoring organization but at a fraction of the cost of an iPad.

Hazelwood concluded “The possibilities for this platform are endless. Initially we see early adoption from areas where relevant content is fast moving such as large organization training and the real estate sector, however it won’t be long before restaurants and large charity events will be using them as printed menus with on-board ordering and payment capabilities along with a means of entering a charity auction”.