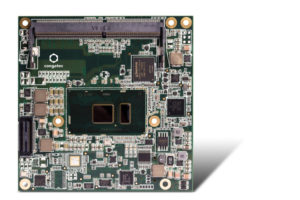 Thanks to its compatibility with the previous generation, the widely improved microarchitecture can be integrated in existing embedded systems without additional design effort. The standardized COM Express form factor, congatec’s extensive industrial driver implementations as well as personal integration support and individual Embedded Design & Manufacturing services make it particularly easy for developers to integrate this new generation. Target applications are found wherever fanless and completely sealed systems must offer high performance at 15 Watt TDP.

“The four current 15 Watt versions of the 7th generation of Intel® Core™ processors on Intel’s IOTG embedded roadmap provide the performance required by many of the new application fields of embedded computing. Demand is found virtually everywhere: from industrial, medical and transportation applications to infotainment and retail as well as in building and home automation. They will also drive the move towards the latest operating systems like Windows 10 IoT, which boasts enhanced security and locking options for IoT connected appliances,” explains Martin Danzer, Director Product Management at congatec. Of course, all other current operating systems such as Linux 3.x / 4.x, Yocto and VxWorks are supported as well.

The new COM Express computer modules from congatec support Intel® Optane™ memory which is based on 3D XPoint technology. Compared to NAND SSDs, it offers significantly lower latency yet is capable of handling the same size of data packets. With a latency of just 10 µs – about a thousand times lower than that of standard HDDs – the boundaries between main memory and storage are becoming fluent. congatec’s evaluation carrier boards already support this fast memory technology, which is especially suited for big data processing, high-performance computing, virtualization, data storage, cloud, simulation, medical imaging and many other applications, in September 2016.

The new conga-TC175 COM Express Compact modules are equipped with 15 Watt dual-core variants of Gen 7 Intel® Core™ SoC processors. Specifically, these are the 2.8 GHz Intel® Core™ i7 7600U, the 2.6 GHz Intel® Core™ i5 7300U and the 2.4 GHz Intel® Core™ i3 7100U processors as well as the Intel® Celeron® 3695U processor with 2.2 GHz. The TDP of all variants is configurable from 7.5 to15 Watts, which makes it easier to adapt the application to the energy concept of the system. All modules support up to 32 GB dual channel memory which for DDR4 provides significantly more bandwidth and better energy efficiency than current conventional DDR3L implementations. The Intel® Gen 9 HD Graphics 620 offers high graphics performance with latest DirectX 12 capabilities and supports up to three independent displays with up to 4k @ 60 Hz via eDP 1.4, DisplayPort 1.2 and HDMI 2.0a. Thanks to hardware-accelerated 10-bit encoding/decoding and high dynamic range of HEVC and VP9, HD streams are becoming more vivid and lifelike in both directions. The new computer modules from congatec support the COM Express Type 6 pinout with PCI Express Gen 3.0, USB 3.0 and 2.0, SATA Gen 3, Gigabit Ethernet, and low-speed interfaces such as LPC, I²C and UART. Customized integration support, a comprehensive range of accessories and optional Embedded Design & Manufacturing services for application specific carrier board and system designs are also available.

For more information about the new conga-TC175 computer module visit: