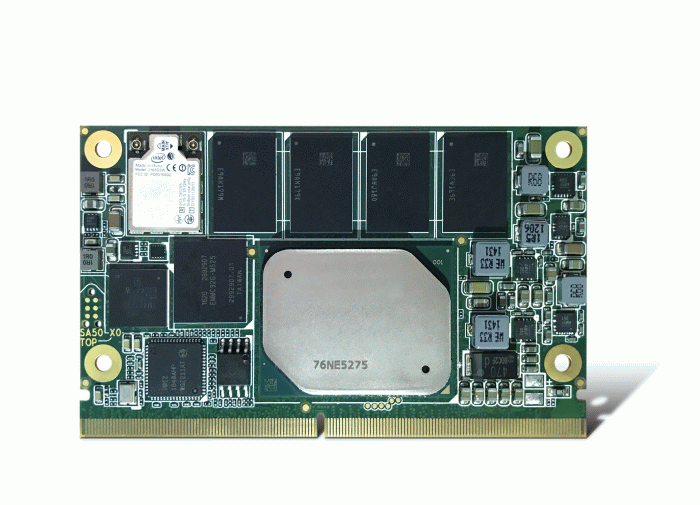 congatec, a leading technology company for embedded computer modules, single board computers and embedded design and manufacturing services, today announced its first credit card sized modules for the new SMARC 2.0 specification. They are based on the brand new 14nm Intel® Atom™, Celeron® and Pentium® processors (code name Apollo Lake) also launched today. The new conga-SA5 Computer-on-Modules not only set new standards in terms of low-power processor performance, but also impress with pre-integrated on board wireless interfaces for IoT connectivity. This is unique for Computer-on-Modules. Also unique is the improved and particularly rich feature set of the new SMARC 2.0 specification, which offers major advancements in technology and performance so that SMARC 2.0 will soon replace previous SMARC 1.1 designs. Developers and OEMs benefit from a completely new module standard with more pre-integrated functionalities making carrier board design considerably easier and more efficient.

congatec CEO Jason Carlson is very pleased with the first SMARC 2.0 product: “As editors of the SMARC 2.0 specification, we have put a lot of know-how and commitment in the development of this new SGET specification. Now this commitment is bearing first fruits: The conga-SA5 is our first product for this new standard. We are proud to have succeeded in releasing it after the short period from June to October – possibly as the first company worldwide – in time for the launch of the new 14nm Intel® Atom™, Celeron® and Pentium® processors. However, what is even more important for us is that we are also able to offer our customers the opportunity of a particularly fast time-to-market.”

In the near future congatec will also be launching the first SMARC 2.0 starter kits. Since the edition will be limited, it is advised to pre-order now. Free revision checks for existing SMARC 1.1 carrier board designs can also be ordered now.

Via the standardized M.2 1216 interface, wireless IoT connectivity becomes an optional standard feature of congatecs new SMARC 2.0 module. According to the application demands, soldered down connectivity modules with fast 2.4 GHz and 5 GHz dual band WLAN 802.11 b/g/n/ac plus Bluetooth Low Energy (BLE) as well as additional NFC functionality can be integrated on the module. The new SMARC 2.0 modules further offer 2x Gigabit Ethernet with hardware-based real-time support via Precision Time Protocol (PTP). For highly integrated designs up to 128 GB non-volatile storage are available on the module with the powerful eMMC 5.0 interface, doubling the bandwidth up to 3.2 Gbit/s (read) compared to eMMC 4.0 for shorter boot times and faster data load. For additional storage, there is one 6 Gbps SATA and SDIO. Generic extensions are connected via 4 PCIe lanes, 2x USB 3.0 and 4x USB 2.0. Further interfaces include 2x SPI, 4x COM as well as two MIPI CSI camera inputs. Audio signals are carried via HDA.

All modules support Windows 10, including the complete Windows 10 IoT range and Android for mobile applications. For a simplified entry into the SMARC 2.0 world, congatec will soon also offer a quick starter kit as well as a comprehensive range of accessories. congatec’s extensive EDM services including application-specific carrier board and system designs are simplifying the application design even further.

The new conga-SA5 comes with the following CPU versions: