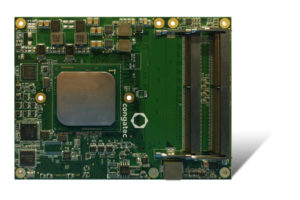 The application-ready, modular core of the long-term available congatec Server-on-Modules offers a standardized footprint, carrier board interfaces and a cooling concept, which significantly simplifies system designs – accelerating the launch of new, robust server technology. Plus, future performance upgrades can be carried out in a remarkably simple and cost-saving way, as only the Server-on-Module needs to be exchanged – even in case of a switch in the processor architecture. Without module technology, upgrading proprietary SBC designs and ATCA platforms used for carrier infrastructures is significantly more expensive.

Christian Eder, Marketing Director at congatec and editor of the COM Express 3.0 specification that includes the new COM Express Type 7 Pinout, emphasizes the significance of the new COM Express Type 7 specification Server-on-Modules: “Up to now, it was not possible to execute 10 Gigabit Ethernet natively on the modules. However, this bandwidth is required to create easily scalable, module server topologies via virtualization. The Type 7 pinout fulfils these demands. It offers up to four 10 Gigabit Ethernet ports and an impressive number of 32 PCIe lanes which are commonly used on this type of server to connect fast SSDs or discrete GPUs. The COM Express footprint is tiny and allows more cores per rack. This extremely compact and robust server technology allows 10 GbE connections to be carried into the field, which is essential for hosting IoT applications.“

The new conga-B7XD COM Express Type 7 Server-on-Modules come in a headless design and are available with ten different server processors: From the 16 Core Intel® Xeon® processor D1577 to the Intel® Pentium® processor D1519 for the industrial temperature range (-40 °C to +85 °C). In terms of memory, they offer up to 48 gigabytes of fast 2400DDR4 memory with or without error correction code (ECC) depending on customers’ requirements.

congatec offers operating system support for all popular Linux distributions and Microsoft Windows variants, including Microsoft Windows 10 IoT. An extensive range of accessories, such as standardized cooling solutions and the new COM Express Type 7 carrier board for evaluation, simplifies the design-in and will become available parallel to the launch of the new modules.

About congatec AG
Headquartered in Deggendorf, Germany, congatec AG is a leading supplier of industrial computer modules using the standard form factors COM Express, Qseven and SMARC as well as single board computers and EDM services. congatec’s products can be used in a variety of industries and applications, such as industrial automation, medical, entertainment, transportation, telecommunication, test & measurement and point-of-sale. Core knowledge and technical know-how includes unique extended BIOS features as well as comprehensive driver and board support packages. Following the design-in phase, customers are given support via extensive product lifecycle management. The company’s products are manufactured by specialist service providers in accordance with modern quality standards. Currently congatec has entities in Taiwan, Japan, China, USA, Australia and the Czech Republic. More information is available on our website at www.congatec.com or via Facebook, Twitter and YouTube.