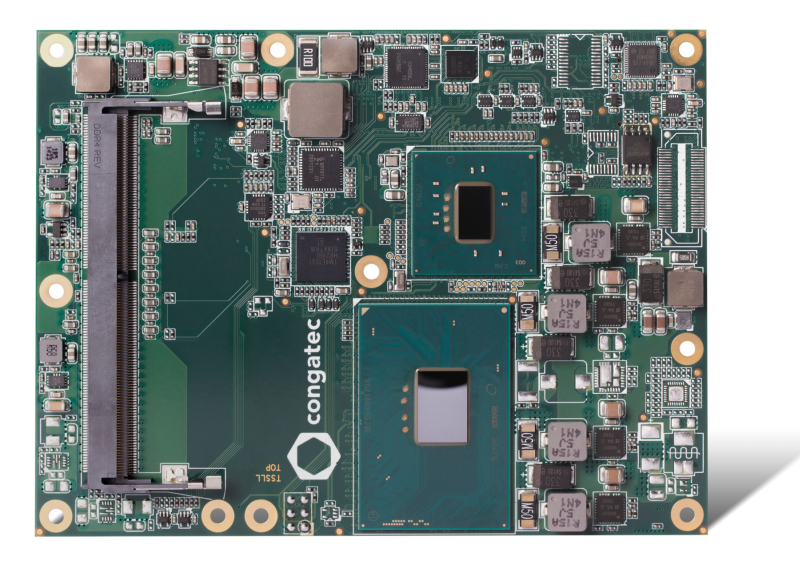 congatec AG, a leading technology company for embedded computer modules, single board computers (SBCs) and embedded design and manufacturing (EDM) services, has expanded its COM Express Basic portfolio with new server-class embedded modules. The new Server-on-Modules are equipped with 6th generation Intel® Xeon® and Intel® Core™ i3 / i5 / i7 processors (codenamed Skylake). The DDR4 memory of the conga-TS170 modules provides up to twice as much system memory performance for data-intensive applications while consuming 20 percent less energy and requiring only half the footprint of DDR3 RAM that is expected to become legacy in future applications. In addition, the modules offer faster processor speeds, a 60 percent accelerated system bus and an enlarged Intel® Smart Cache (up to 8 MB) as well as the PCIe Gen 3.0 support for all PCIe Lanes and the new Intel® HD Graphics P530. Overall, users can expect to benefit from enhanced system performance and packing density with lower space and energy requirements.

The new  modules have been developed for the server-class of embedded designs that operate within a thermal power envelope of 25-45W TDP and require custom I/O and IoT interfaces. The new conga-TS170 modules equipped with Intel Core processors are suitable for applications including test and measurement equipment, back-end systems in medical imaging, high-performance industrial workload stations as well as intelligent vending machines.

In addition, the new conga-TS170 modules offer powerful tools to manage distributed IoT, M2M and Industry 4.0 applications. Thanks to Intel® vPro technology and congatec’s board management controller with watchdog timer and power loss control, the modules are fully equipped for remote monitoring, management and maintenance tasks, right down to out-of-band management.

For cost-sensitive applications that do not necessarily require complex out-of-band management or virtualization, modules based on the Intel® Core™ i3 processor and the Mobile Intel® HM170 chipset are also available.

The new conga-TS170 modules are equipped with the latest 6th generation 14nm Xeon® v5 and Intel® Core™ processors. They feature a TDP of 25-45W, up to 8MB smart cache and super-fast 2133 DDR4 memory up to 32 GB, implemented as ECC memory for safety-critical applications in the Intel® Xeon variants. For energy-efficient 24/7 operation, the new modules support disconnected standby in place of the legacy S3 mode. With disconnected standby, switching from energy-saving sleep mode to full performance takes less than half a second; as a result, systems can go into sleep mode more frequently without affecting usability and responsiveness.

The integrated 9th generation Intel® HD Graphics 530 supports DirectX 12 for faster Windows 10 based 3D graphics on up to 3 independent 4K (3840 x 1260) displays via HDMI 1.4, DVI or DisplayPort 1.2. For legacy applications, a dual-channel LVDS output and optional VGA are available. Thanks to hardware support for the decoding as well as the encoding of HEVC, VP8, VP9 and VDENC, it is now possible to stream HD video energy-efficiently in both directions.

A data sheet plus additional information on the new conga-TS170 modules are available at: http://www.congatec.com/products/com-express-type6/conga-ts170.html.

About congatec AG
Headquartered in Deggendorf, Germany, congatec AG is a leading supplier of industrial computer modules using the standard form factors Qseven, COM Express, XTX and ETX, as well as single board computers and EDM services. congatec’s products can be used in a variety of industries and applications, such as industrial automation, medical, entertainment, transportation, telecommunication, test & measurement and point-of-sale. Core knowledge and technical know-how includes unique extended BIOS features as well as comprehensive driver and board support packages. Following the design-in phase, customers are given support via extensive product lifecycle management. The company’s products are manufactured by specialist service providers in accordance with modern quality standards. Currently congatec has entities in Taiwan, Japan, China, USA, Australia and the Czech Republic. More information is available on our website at www.congatec.com or via Facebook, Twitter and YouTube.

Intel and Intel Xeon, Core are registered trademarks of Intel Corporation in the U.S. and other countries.