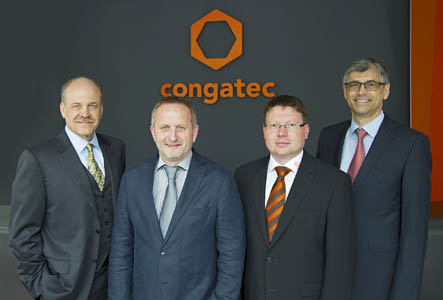 congatec, a technology and service provider for embedded computer boards and modules, has announced that it has expanded its executive board to help accelerate growth and named Jason Carlson as the new CEO. Carlson, who will be based in the United States, will lead congatec as it continues to pursue its growth strategy.

Gerhard Edi, founding member of congatec and its CEO since 2007, stated: “The appointment of Jason Carlson fulfills my desire to bring in a new CEO, preferably American, with the experience we need to fulfill our next growth milestones. This allows me to focus on the CTO role within the executive board and enables me to continue to provide the leadership for congatec’s strategic and technological development.”

Mr. Carlson, who brings more than 25 years of experience in leading private and publicly held technology companies, stated: “congatec has a clear focus, direction and mission in a dynamic and growing market. My mission now is to identify and coordinate internal and external growth opportunities, with the goal of elevating congatec from its present status as a European leader in embedded computer technologies to becoming a global player. With Gerhard as CTO, Josef as CFO and Matthias as COO, I am very fortunate to have such strong and experienced partners in the executive board that complement my skills and who will support me in focusing on our growth strategies.”

Mr. Carlson joined the executive board (“Vorstand”) as CEO effective after congatec’s supervisory board meeting on June 23rd. His previous experience in leadership roles at public companies includes CEO of Semtech Corp., VP/GM at Cirrus Logic, Board member at Advanced Analogic Technologies, and Vicor, where he is currently a Board member. Most recently he was CEO of QD Vision, and previously was CEO at Emo Labs and Audiologic.

In the new role as CFO (“Vorstand Finanzen”), Josef Wenzl will strengthen the financial strategy with his experience in leading finance at congatec since 2010. Prior to joining congatec, Josef Wenzl served as director finance and site general manager at Force Computers, Motorola and Emerson.