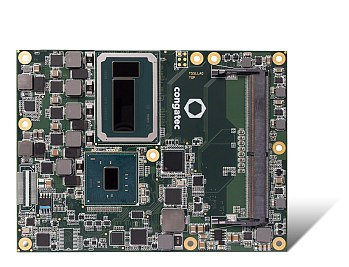 Compared to their predecessors (codename Skylake), the new modules host increased CPU frequencies and performance, more dynamic HDR graphics thanks to 10-bit video codecs, and support super-fast 3D XPoint-based Intel Optane memory. In comparison to the single chip variants of the new Gen 7 Intel Core processors, the dual chip versions set the latest state-of-the-art benchmark for high-end Server-on-Module applications and high-end embedded use cases with hyper threading within the embedded power envelope of up to 45 Watts.

‘The new modules will significantly change the way we leverage massive data streams because they support the new Intel Optane memory which is based on 3D XPoint technology. It offers a significantly lower latency while handling the same size of data packets compared to NAND SSDs, and compared to standard HDDs, its latency of just 10 µs is even a thousand times lower. As a consequence, the responsiveness of applications such as Big Data processing, High-Performance Computing, virtualisation, data storage, clouds and computer games can be massively improved by utilising Computer-on-Modules that support this very fast, cost effective and non-volatile memory,’ explains Martin Danzer, director product management at congatec.

The new conga-TS175 COM Express Basic module is available with two quadcore Intel Xeon processors with hyper threading as well as five different Intel Core i7, i5 and i3 processors within a 45 to 25 W TDP envelope. Bandwidth intensive applications will benefit from up to 32 gigabytes of fast dual channel 2400 DDR4 memory – including ECC support option. In regards to visual experience, they feature the new Intel HD630 graphics supporting up to three independent displays with up to 4k @ 60 Hz via DisplayPort 1.4 and HDMI 2.0 – both with HDCP 2.2, and eDP 1.4 support. Additionally, the modules also offer dual channel LVDS and VGA for legacy displays. Thanks to hardware-accelerated 10-bit encoding/decoding and high dynamic range of HEVC and VP9, HD streams are becoming more vivid and lifelike in both directions.