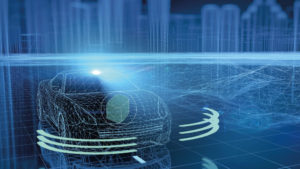 Imagine a future where autonomous, electric vehicles take us on morning commutes without fuss, ordered through smartphones connected to lightning-fast 5G networks, and communicating with multiple IoT devices. Visualise a world without Wi-Fi routers, where internet signals are transmitted through artificial light and connectivity is never an issue. We are on the cusp of a faster, more efficient, more functional digital world – a world defined by the application of compound semiconductors, and there is vast scope for the UK electronics industry to take advantage of that.

We cannot downplay the role that silicon semiconductors have played in all electronic devices today, but silicon has its limitations. A key advantage of compound semiconductors is their ability to emit light. One of the earliest applications of this technology was in the 1980s, when compound semiconductors facilitated low-cost production of red then blue laser diodes, which are used to read information from CDs and DVDs. More recently, many smartphone features that are now taken for granted, such as the camera flash, would not be possible without compound semiconductors.

Based on multiple elements, such as gallium arsenide (GaAs), compound semiconductors can transmit and convert data up to 100 times faster than their silicon relatives, are more power efficient, and greatly reduce network latency. These advancements will be essential in powering the next generation of digital communications.

Today, speed is everything. The universal consumer demand for instantaneous connectivity, fast downloads, and buffer-less streaming is practically insatiable, and mobile data traffic is forecast to grow at an average rate of 47 per cent over the next five years. Before long, 4G networks will struggle to cope, particularly with the consumer’s increasing reliance on new-age technologies such as artificial intelligence, virtual reality, and the IoT. There is a pressing need for 5G deployment, which is expected to deliver ultra-high data rates (10Gbps) – around 100 times faster than 4G – to more than 100 billion devices with negligible delays. 5G could even supersede broadband in some regions.

However, there are many bottlenecks that need to be overcome when implementing the 5G network, some of which will occur within handheld devices or wearable technology. The utilisation of compound semiconductors provides a solution to this problem, with another material, gallium nitride (GaN), capable of delivering the power needed to cope with the increased data transmission speeds of 5G and without the undesirable side effect of producing excess heat. 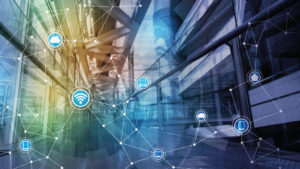 LiFi (light fidelity) is a hot topic of conversation at the moment, using light bulbs to transmit data. LiFi could complement or replace existing WiFi infrastructures, and is a real option when seeking to overcome issues of RF-bandwidth limitations. LEDs (light-emitting diodes) are based on compound semiconductors, and have the ability to send pulses of light at frequencies that can’t be detected by the human eye. Compound semiconductor sensors in mobile devices could convert those light pulses into data, effectively connecting to a light bulb as a wireless transmitter. This technology could be implemented globally without the need for new infrastructure. A potential downside to LiFi is a light-bulb needs to be constantly switched on, but in places like underground stations, for example, that would never be a problem.

Our electronics industry is thriving, and there are opportunities to drive growth here through greater adoption of compound semiconductors.

Smartphone developers have already utilised advancements in technology based on the materials, which feature in high-speed processors, camera flashlights, and wireless receivers, and we are witnessing the early developments of features like gesture control. There’s a necessity to integrate new technology without significantly compromising the battery life of our devices, but there are opportunities for developers to take advantage of the power efficient capabilities of compound semiconductors here, too.

However, the electronics industry faces challenges to the adoption of compound semiconductors. They are more complex and expensive to design than silicon alternatives, and many of the 5,000 UK electronics companies that could benefit from compound semiconductors do not have access to the specialist expertise, tools, and facilities needed to utilise and test them. This is a fundamental obstacle the Compound Semiconductor Applications (CSA) Catapult seeks to address.

The CSA Catapult will be in full operation next year, and will help UK companies overcome these challenges and fully exploit the potential of advances in compound semiconductor technologies. It will open state-of-the-art, world-class innovation centre, based in south Wales and accessible to companies across the UK. This ground-breaking investment will provide the facilities and expertise to quickly help industry take new products to market.

For visionary companies looking to pull digital communications technology into a new future, there will be access to a design studio utilising simulation and modelling tools, where they can explore and test those concepts assisted by world-leading experts. The innovation centre will also play host to dedicated laboratories for radio frequency (RF) and microwave, packaging, power electronics, and photonics, where companies can demonstrate whether new products are ready for market. The Catapult will invest in challenge-led programmes, where different companies can collaborate and exploit the centre’s facilities to tackle global industry challenges.

And throughout 2018, the Catapult will develop a range of evaluation modules featuring the latest compound semiconductor devices. Companies will have access to these modules, either at their headquarters or at the innovation centre, where they will be able to evaluate the effect of compound semiconductors on their products. This will not only facilitate the rapid development of new digital communications technologies, but open the playing field to thousands of SMEs and start-ups previously accessible to only the big players.

The UK electronics industry could be unrivalled in its control of designing, manufacturing, and marketing digital communications technology. We are at the dawn of a technological revolution, where cities are smart, transport is autonomous, and the health sector is using wearable technology to save lives. Innovative companies working to put exciting ideas into development and take products to market are at the heart of that revolution. The Compound Semiconductor Applications Catapult will be on hand to help them achieve their ambitions and drive economic growth throughout the UK.