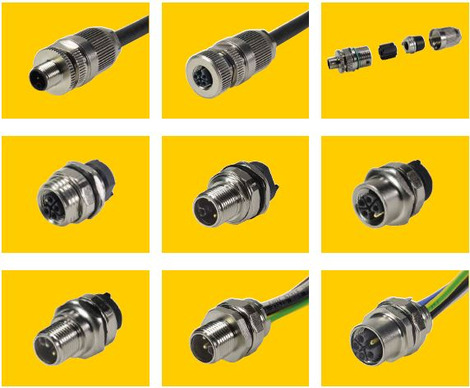 New concepts are needed to meet Industrie 4.0’s increasing “appetite for energy” resulting from the growing number of participants in the area of automation. In addition to signals and data, more and more power must also be transmitted. As a result, HARTING Technology Group has helped push ahead with the development of a new industry standard whose objective is the creation of manufacturer-neutral mating faces. The resulting new Standard IEC 61076-2-111 is the basis for future M12 power connector solutions. The adopted standard has also led to the emergence of the new, universal mating face with L-coding. This standardisation effort offers our customers investment security for the future and establishes the M12 in the power connector segment.

In addition to signals and data, more and more power must also be transmitted.

The 5-pole L-coding boasts 0.75 kW power at 63V / 16 A, making it ideally suited for small servo motors, field  distribution boxes, field-bus controlled I/O boxes, network devices and valve applications. Besides the classic M12 applications, the future will see more markets – e.g. transportation – which could be addressed by this power variant in different encodings or in combination with PushPull technology. The PNO views the L-coded M12 as the future standard device connection that will completely replace the area of application of the existing M12 A-coded  and 7/8“ solutions. Thus, in the future a uniform and universal IP65/67 power connector will be able to be employed. The M12 Power’s smaller build is thus fully in line with the trend towards miniaturisation.

The PNO views the L-coded M12 as the future standard device connection.

In addition to its impressive performance and small size, the M12 Power’s portfolio also includes impressive  versatility. On the cable side, the well-known HARAX® IDC connectors and crimp terminals are available for straight versions as male and female variants. These feature the proven 360° shielding concept that is already successfully being used in the Slim Design series. As a result, HARTING has taken into account a market requirement that goes even beyond the requirements of the relevant IEC 61076-2-111 standard. The portfolio is rounded out by panel feed-throughs, reflow-compatible PCB connectors, straight designs and customised cable assemblies in various lengths and cable types. In the area of customisation, the new M12 Power means that HARTING offers its customers a standardised yet customisable power connector – a solution that at all events meets the Fourth Industrial Revolution’s “appetite for energy”.