The new R&S ZNLE vector network analyser from Rohde & Schwarz brings excellent RF performance and faster measurements to the economy class. This easy-to-use instrument is the lightest, most compact VNA in its class, making S parameter measurements as easy as ABC

Rohde & Schwarz has launched the R&S ZNLE vector network analyser to address the requirements of customers looking to perform RF measurements to characterise components such as antennas, attenuators, filters and PCBs. The new standalone instrument weighs only 6 kg and has a footprint of just 408 mm x 235 mm, saving up to two thirds of space on the workbench compared with competitive VNAs. 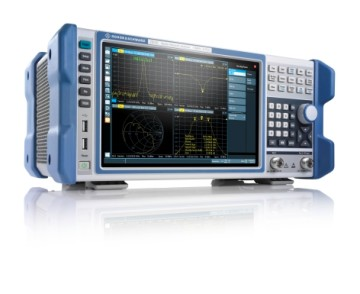 The two-port vector network analyser not only saves space but also provides quick and accurate measurements, not least due to its easy-to-use S-parameter wizard. The R&S ZNLE performs bidirectional measurements of the S11, S21, S12 and S22 S parameters. An optional GPIB interface is available for remote control of the analyser. The instrument comes in two models with frequency ranges from 1 MHz to 3 GHz (R&S ZNLE3) and to 6 GHz (R&S ZNLE6).

The R&S ZNLE features a large 10.1′ WXGA touchscreen, providing good visibility of all traces. The touchscreen supports zooming in and out of traces using multitouch gestures. The well-structured user interface makes it possible to access every function with a minimum number of steps. Undo/Redo softkeys are available to cancel and restore user entries. Context-sensitive help menus for the diverse functions and parameters facilitate interactive operation.

Calibration of the instrument is just as straightforward. The R&S ZNLE incorporates the well-known calibration wizard used in other Rohde & Schwarz R&S ZNx analysers. Calibration units are also supported. To make life even easier, the ‘Start Auto Cal’ function delivers automatic calibration at the touch of a button.