Close to the edge: Brain-inspired technologies will bring data processing and analytics to Internet of Things devices

CEA-Leti’s chief scientist today issued a forward-looking call to action for the microelectronics industry to create a radically new, digital-communication architecture for the Internet of Things in which “a great deal of analytics processing occurs at the edge and at the end devices instead of in the cloud”.

Delivering a keynote presentation at the kickoff of ISSCC 2018, Barbara De Salvo said this architecture will include human-brain inspired hardware coupled to new computing paradigms and algorithms that “will allow for distributed intelligence over the whole IoT network, all-the-way down to ultralow-power end-devices.” 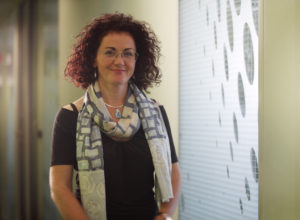 “We are entering a new era where artificial-intelligence systems are … shaping the future world,” said De Salvo, who also is Leti’s scientific director. “With the end of Moore’s Law in sight, transformative approaches are needed to address the enduring power-efficiency issues of traditional computing architectures.”

The potential efficiencies of processing data at the edge of networks – e.g. by small computers located near IoT-connected devices – rather than at distant data centres or the cloud are increasingly cited as long-term goals for the Internet of Things. But the challenges to realising this vision are formidable. For example, IoT battery-powered devices lack both processing power to analyse the data they receive and a power source that would support data processing.

To break through these barriers, De Salvo called for a “holistic research approach to the development of low-power architectures inspired by the human brain, where process development and integration, circuit design, system architecture and learning algorithms are simultaneously optimised.” She envisions a future in which optimised neuromorphic hardware will be implemented as a highly promising solution for future ultralow-power cognitive systems that extend well beyond the IoT.

“Emerging technologies such as advanced CMOS, 3D technologies, emerging resistive memories, and silicon photonics, coupled with novel brain-inspired paradigms, such as spike-coding and spike-time-dependent-plasticity, have extraordinary potential to provide intelligent features in hardware, approaching the way knowledge is created and processed in the human brain,” she said.

De Salvo’s presentation, “Brain-Inspired Technologies: Towards Chips that Think”, included summaries of key research findings in a variety of fields that will play a role in developing brain-inspired technologies for computing and data-handling requirements of a “hyperconnected” world.

Tracing major discoveries about how the brain works, De Salvo cited the emergence of connectionism, novel neuroimaging techniques and the functioning of neural networks, which may provide models for brain-inspired technologies.

“The large-scale neuronal networks of the brain are arranged globally as hierarchical modular networks, with dense modules at the local level (cellular circuits, laminar compartments) that are encapsulated in increasingly larger modules (cortical columns, areas and whole lobes), but with very sparse overall connectivity,” she said. “Such a topology fundamentally enhances the brain’s dynamic stability and information-processing abilities.

“An important research target will be to understand how the three-dimensional organisation of brain cells, neurons and glial cells, connected in networks within the layers of the brain cortex, are responsible for the emergence of genetically determined elementary operations,” De Salvo said.

She also noted that the convergence of miniaturisation, wireless connectivity, increased data-storage capacity, and data analytics, has positioned the Internet of Things at the epicentre of profound social, business and political changes.

“With billions of easy-access and low-cost connected devices, the world has entered the era of hyperconnectivity, enabling people and machines to interact in a symbiotic way (anytime, anywhere) with both the physical and cyber worlds,” De Salvo said. “AI has been at the centre of this revolution.”

She cited significant gains in the performance and applications of machine learning, driven by vast data storage in images, videos, audio and text files available across the Internet. These gains, in turn, have been essential to the dramatic improvement of learning/training approaches and algorithms, as well as the increased computational power of computers, including parallel computing for neural network processing, which has compensated for the slowing down of Moore’s Law below the 10nm node. Deep learning is the most popular machine-learning field.

“Today, for tasks such as image or speech recognition, machine-learning applications are equaling or even surpassing expert human performance,” De Salvo said. “Other tasks considered as extremely difficult in the past, such as natural language comprehension or complex games, have been successfully tackled.” Future applications will require even more analysis, understanding of the environment and intelligence, and machine-learning algorithms will require more computing power to become pervasive.

“Bringing intelligence to the edge or to end-devices means doing useful processing of the data as close to the collection point as possible, and allowing systems to make some operational decisions locally, possibly semi-autonomously,” De Salvo explained.

Controlling real-time distance learning locally is essential for many applications, from landing drones to navigating driverless cars. “The delay caused by the round-trip to the cloud could lead to disastrous or even fatal results,” she said. “Privacy will require that key data not leave the user’s device, while transmission of high-level information, generated by local neural-network algorithms, will be authorised.”

Raw videos generated by millions of cameras will have to be locally analysed to limit bandwidth issues and communication costs. For all these reasons, new concepts and technologies that can bring artificial intelligence closer to the edge and end-devices are in high demand.

“The primary design goal in distributed applications covering several levels of hierarchy (similar to what happens in the brain), is to find a global optimum between performance and energy consumption,” De Salvo said. “This imperative requires a holistic research approach, where the technology stack (from device to applications) is redesigned.”

This process is underway. Companies are addressing embedded applications by developing specialised edge platforms that can execute machine-learning algorithms on embedded hardware. Impressive power improvements (down to a few watts) have been achieved exploiting Moore’s Law: pushing the FinFET technology down to the 7nm node and by hardware-software co-optimisation. To optimise energy efficiency in mobile devices, several research groups have focused on hardware designs of Convolutional Neural Network (CNN) accelerators. De Salvo noted that off-chip storage devices, such as DRAMs, significantly increase power consumption, but that mobile-oriented applications (keyword spotting and face detection) have been demonstrated with a low-power programmable deep-learning accelerator that consumes less than 300µW.

Some fixes to challenges are still in the discussion stage. For example, De Salvo noted that bringing intelligence into low-power IoT-connected end-devices that support applications such as habitat monitoring and medical surveillance is significantly more difficult than bringing it to traditional networked mobile devices at the edge. “Most connected end devices are wireless sensor nodes containing microcontrollers, wireless transceivers, sensors, and actuators,” she said. “The power requirement for these systems is extremely critical – less than 100μW for normal workloads – as these devices often operate using energy-harvesting sources or a single battery for several years.”

De Salvo said scientists inspired by the human brain, whose computing performance and efficiency still remain unmatched, are pursuing a radically different approach to neuromorphic systems. “It consists in implementing bio-inspired architectures in optimised neuromorphic hardware to provide direct one-to-one mapping between the hardware and the learning algorithm running on it,” she said. These architectures include spike coding, which encodes neuron values as pulses or spikes rather then analog or digital values, and spike-timing-dependent-plasticity, a bio-inspired algorithm that enables unsupervised learning.

De Salvo said the human brain’s intelligence and efficiency are strongly linked to its extremely dense 3D interconnectivity. For example, there are approximately 10,000 synapses per neuron, and billions of neurons in the human brain cortex. “The hierarchical structure in the cortex follows specific patterns, through vertical arrangements or µcolumns, where local data flow on subcortical specialised structures, and laminar interconnections, which foster inter-area communications and to build the hierarchy.

“Based on these considerations, it is clear that emerging 3D technologies, such as through-silicon vias and 3D monolithic integration, also called CoolCube, will be a key enabler of efficient neuromorphic hardware,” she said.

“Thanks to its suitability for low-power design, FDSOI technology is a great candidate for neuromorphic hardware,” she said. In deep-learning architectures, high-performance reconfigurable digital processors based on 28nm FDSOI have shown power consumption in the range of 50mW, a power efficiency achieved by introducing optimised data-movement strategy and exploiting FDSOI back-biasing strategies. De Salvo also noted that a large-scale multi-core neuromorphic processor called Dynap-SEL, also based on 28nm FDSOI, recently was demonstrated.

De Salvo concluded her optimistic presentation about the future and potential of brain-inspired hardware, AI and edge computing by listing the technological challenges on the road to that goal. But she left the audience with one final prediction.

“New materials to interface devices with living cells and tissues, new design architectures for lowering power consumption, data extraction and management at the system level, and secured communications are the next domains that will experience intense development,” she said. “Brain-inspired implantable microdevices, acting as intelligent neuroprostheses, and bio-hybrid systems represent the new era of cross-disciplinary brain-repair strategies, where biological and engineered solutions will complement each other, probably mediated by artificial intelligence.”