Clarity when it counts

For many of us, checking the remaining battery life of mobile devices has become part of a daily routine. It can be frustrating when a battery, which seemingly has 20 per cent remaining charge, suddenly shuts down. Here, Michele Windsor, direct sales and marketing manager at professional battery manufacturer Accutronics, explains how inaccurate fuel gauging poses a big problem for portable military devices, where the repercussions are more severe than an inability to read e-mails on the go.

In the age of convenience, reliable power supplies take on a new importance for devices. Whether it is consumer electronics, portable military communications or remote surveillance applications, more electronic manufacturers are moving away from fixed equipment and towards battery-powered designs. This presents end users with a new inconvenience in the form of a limited battery life. 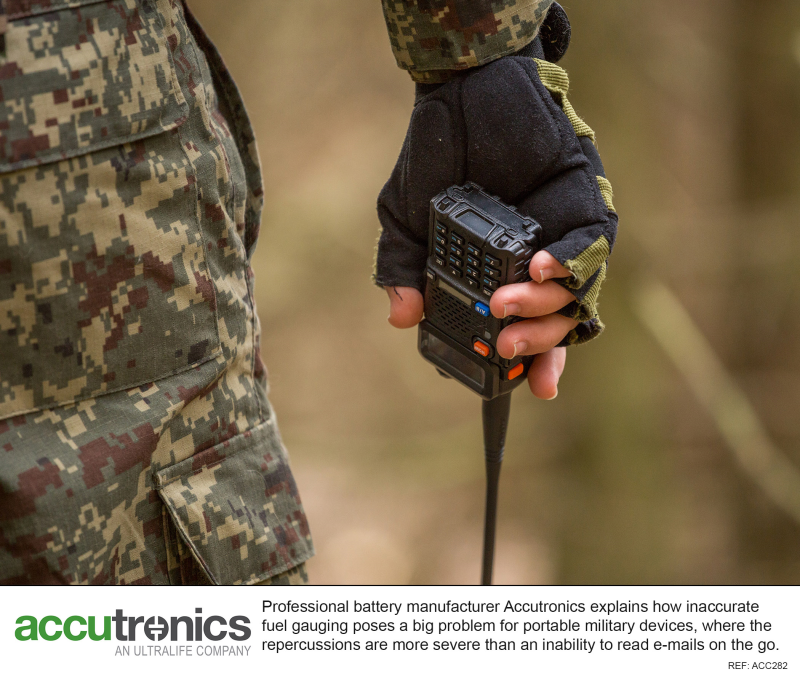 Despite their importance, a recent survey found that 70 per cent of consumers consider batteries to be the biggest limitation on portable device usage. While this is a consumer-oriented study, it highlights an underlying problem with the development of increasingly complex portable devices. The problem is that today”s devices have more energy intensive functions that require more battery life, which causes issues for the defence and military industries.

The demands we place on batteries makes accurate fuel gauging essential. As devices are designed to fulfil more demanding roles and to operate for longer periods of time, it is crucial that end users are able to monitor the remaining charge. However, there is no benefit to the user unless that gauging is accurate.

For example, military personnel will often find themselves called out on missions with no advance warning. In these situations, soldiers will usually pack light, taking only the essentials, including communications devices with only a single replacement battery. Circumstances such as this require personnel to identify at a glance whether they should change battery before leaving base or not.

Similarly, missions regularly take longer than initially expected. At these times, it is important that personnel can identify the accurate state of charge and, if necessary, conserve power by only using the device when it is essential. If a battery displays 30 per cent charge but actually has only 15, individuals may become stranded without a means of communicating and could be considered missing.

Fortunately, inaccurate fuel gauging is easily addressed. It is often symptomatic of the component counterfeiting issue that the worldwide electronics market is facing, which can be tackled by military original equipment manufacturers (OEMs) working with battery manufacturers to ensure legitimate and high quality products.

As more devices require battery power, an increasing number of OEMs look for cheaper alternatives to professional military batteries. This results in grey market smart batteries that lack many important characteristics, such as reliable performance, sufficient power density and accurate fuel gauging. These cheaper options are an unwise investment and can have potentially dangerous implications.

Drawing on years of experience in serving the defence and military sectors, Accutronics has developed a range of pre-engineered smart batteries that feature an impedance tracking fuel gauge accurate to within one per cent. This is visible through a clear bar graph for quick and easy identification.

Like most of the consumer population, military personnel regularly check to see the state of charge of their batteries. By investing in smart batteries with accurate fuel gauging, the military can achieve this with absolute clarity when it matters most.