Touchscreen technology has come a long way since it was first used in 1966 in a radar screen used by the Royal Radar Establishment (RRE) for air traffic control. Despite it being bulky, slow, imprecise and very expensive, it was in use until the 1990s. Since then, consumers have come to expect quick and responsive touchscreens, which are increasingly used in industrial environments. Here, Noel Sheppard, director of industrial computing specialist Distec Ltd, explains how companies can choose between projected capacitance (PCAP) and resistive touchscreen technologies

Resistive touchscreens are typically found in retail electronic point of sale (EPOS) devices and companies have traditionally used them in industry. These have several layers, including two thin transparent, electrically resistive layers, separated by a thin space. When an object such as a fingertip or stylus tip presses down on the outer surface, the two layers touch to become connected. These touchscreens simply need enough pressure for the touch to be sensed and can be used while wearing gloves or other personal protective equipment (PPE). 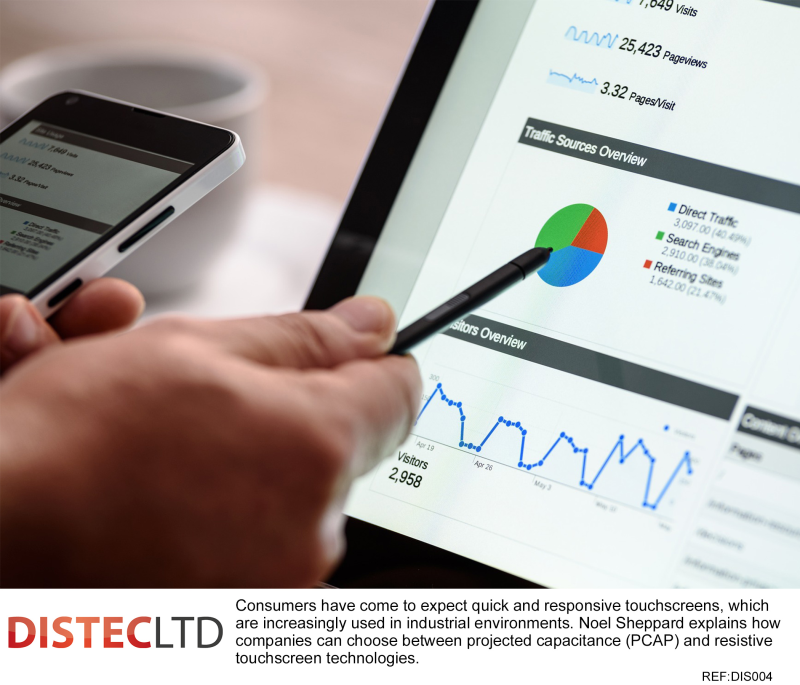 Resistive technology has historically been much cheaper than the newer projected capacitance (PCAP) technologies. Resistive’s higher resistance to liquids and contaminants is also particularly beneficial in restaurants, factories and hospitals, where there is a risk of spillages. Resistive touchscreens can also be protected by the use of a cover sheet. This is particularly important in the food industry where, in the case of breakage, glass shards do not contaminate food. A cover sheet contains the spread of any shards to prevent them from shattering over the production area.

A drawback of resistive screens is that they tend to be more opaque and the clarity of the screen is lower. For some industrial environments, this is not an issue and the robustness and low costs makes resistive touchscreen technology a reliable choice.

Recent developments in touchscreen technology have led to the widespread use of capacitive touchscreens. Anyone that uses a modern smartphone or tablet will be familiar with capacitive technology.

A variant of this technology, projected capacitance (PCAP) touchscreens function in a different manner to resistive touchscreens. They are formed of rows and columns of conductive material, which is layered on sheets of glass. When voltage is applied to the grid, it creates a uniform electrostatic field. This field is disrupted when a conductive object such as a finger comes into contact with the grid. This exact point of contact is then measurable due to a change in capacitance, meaning the computer can accurately track touch input.

PCAP touchscreens are being increasingly used in retail environments. These use multi touch technology, which allows for a simple-to-use interface that requires no training. Additionally, they can have anti glare covers and cover the device from edge to edge, meaning there are no bezels, improving the aesthetic appeal of the device.

To protect the touchscreen and the PC itself against vandalism or damage, PCAP touchscreens feature a layer on the outer surface otherwise known as a sacrificial layer. Although traditionally made from glass and prone to etching and damage, these layers can now be made from polycarbons, which remove the potential of damage to the layer, yet also eradicate the potential of shattered glass.

At Distec, we’ve sold touchscreens for over fifteen years to customers from a range of sectors and we know that there isn’t one touchscreen to fit all. PCAP and resistive touch screens, as well as the numerous others available on the market have advantages and disadvantages. When choosing a touchscreen for use in your business, whether for an outdoor kiosk or a bustling factory, it is important to choose the right one for your needs.

Rather than simply selecting the cheapest product from the internet, it is more cost effective to work with suppliers who allow you to loan the products and test them in real life environments. This means that if, for example, you choose a PCAP product and it’s now what you were looking for, you can easily swap to another technology without having to risk high capital expenditure on a product that is not fit for purpose.

Touch screen technology may have come a long way since 1966, but choosing the wrong touch screen for your application can make it just as expensive and difficult to use as the first ever touch screen.