Brits want to use voice controlled Smart Home devices, but don’t know how

Over 56 per cent of Brits are already using or would consider using voice-controlled connected devices in the home, however most of them (55 per cent) don’t know how to install these and would need professional help, according to research just released by online electronics retailer, reichelt elektronik.

The enthusiasm for state-of-the-art technology in the home is also apparent with systems like Amazon Alexa, Google Home or Microsoft Cortana. While 50 per cent of respondents would consider installing a voice-controlled solution, six per cent already use the new technology in their home. 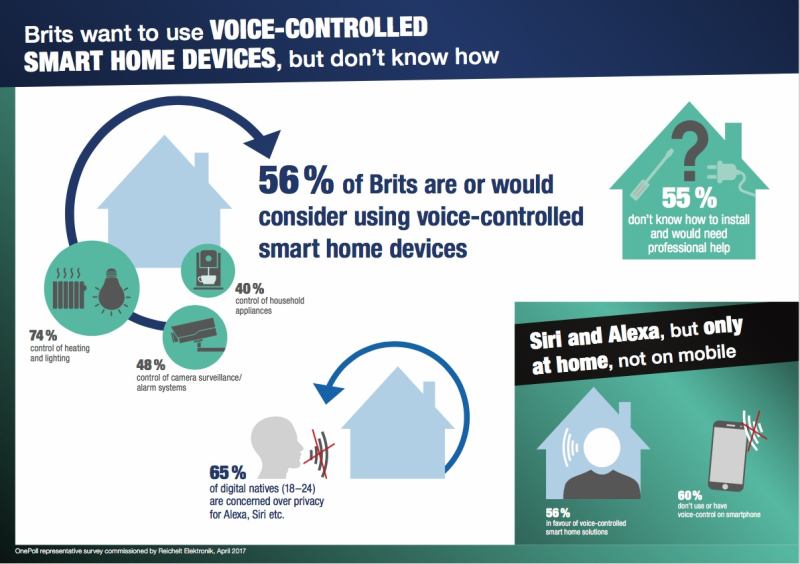 In the case of voice-controlled home automation solutions, the desire to operate heating and lighting either automatically or remotely is the first priority (74 per cent), closely followed by camera surveillance/alarm systems (48 per cent) as well as kitchen and household appliances (40 per cent).

Germans are more confident than the Brits to install

Across Europe the trend is similar. reichelt’s research found that most German (70 per cent) and French (63 per cent) people surveyed were the same as the Brits, however about half of Germans would do it themselves. 49 per cent – and for men it is as much as 60 per cent – are confident, according to the survey, to be able to accomplish the installation of home automation itself without a specialist. At least 16 per cent believe that they can design and install their own system with electronic components.

Of the 30 per cent who wouldn’t consider using devices like Alexa, Siri or Google Home, this was due to concerns over data protection. This is especially striking in the age group of the 18- to 24-year-olds. Digital natives are of the age group most interested in new technology. Those in this group who do not want to use them (40 per cent) clearly state privacy concerns (65 per cent).

Siri and Alexa, but only at home, not on mobile

Alexa, Google Home & co. are generally well received by the majority of respondents for the home. This is very different for mobile. Only 29 per cent of the interviewees use the voice assistant on their smartphone regularly (at least every other day) while 60 per cent indicated they never used it or did not have a mobile phone with a voice assistant.