Innovative electronics company, Plessey Semiconductor, has been named as the winner of the Grand Prix prize at the 2017 British Engineering Excellence Awards (BEEAs), held at the HAC in London.

Plessey Semiconductor has developed high power GaN-on-Silicon LEDs, which provide 30 per cent more light output than competitive devices, with better thermal performance and no visible “cross-hair” – at half the cost. 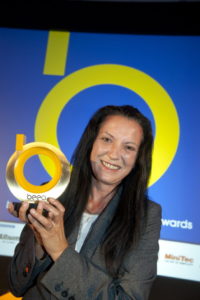 Plessey is the only major manufacturer making GaN-on- Si LEDs, rather than using gallium nitride-based LEDs on sapphire substrates. This unique capability brings many advantages. GaN-on-Si LEDs emit more light than standard sapphire-based LEDs because of their higher drive current, and exhibit excellent thermal performance. They are particularly useful in large formats, where standard sapphire-based LEDs typically struggle. In the past, LED manufacturers have got round this problem by using multiple dies to create larger modules – leaving a tell-tale “cross-hair” shadow in the middle of the beam.

The unique integrated multi-junction die architecture sets a new benchmark in far-field imaging and the use of secondary optics in applications that require a narrow beam angle.

The judges were so impressed with Plessey Semiconductor’s technology development that they were also named as the winner of the Materials Application of the Year award for the LUCIAN high power LEDs.

Commenting on Plessey’s innovation, Eric Wilkinson, chairman of the judges and CEO of Cambridge Consultants, said: “Choosing the Grand Prix winner is always tough and sometimes creates heated debate amongst the judges. This year the judges felt that designing a better LED is the latter-day equivalent of designing the better mouse trap. While LEDs can save energy, they bring design challenges. By developing a Gallium Nitride-on-silicon process, Plessey is now showing the way forward and deserves special recognition as a shining example of British Engineering Excellence.”

Luke Webster, publishing director of awards organiser MA Business, added: “Once again, the British Engineering Excellence Awards has attracted a host of impressive entries from brilliant British innovators. The entry from Plessey Semiconductor was one of many exceptional entries and much debate went into deciding the Grand Prix winner. Through every category, the judges were deeply impressed by the quality of engineering put forward and the talent behind it. I congratulate all those entrants that were shortlisted and of course the winners.”

To succeed in this category, the judges were looking for a company with a sound business plan, a product or service that meets a market need and the successful reception of that product. They also wanted to see evidence of either competing successfully with much larger rivals or exploiting a viable market niche.

Diamond Hard Surfaces is a material technology and solution provider to companies looking to take advantage of the high endurance of Amorphous Diamond Material, or A.D.M. Produced using a patented and environmentally friendly process, it gives extended life in high temperature, chemically aggressive and abrasive environments.

The judges found it exceptionally difficult to decide the winner of this category and decided to award a Highly Commended certificate to Emblation, global leader in the design, development and manufacture of microwave based medical devices. Emblation, is significantly smaller than major players in its market. The company’s product and business strategy have contributed to the development of a successful small business within a hyper-competitive market.

Start Up of the Year: Open Bionics

The Start-up of the Year category celebrates tomorrow’s companies and technological successes. The Judges were looking for a company established no earlier than 1st January 2013, developing mechanical and/or electronic products or offering engineering based services to customers in the UK and elsewhere. While its focus is on developing affordable robotic prosthetics, Open Bionics impressed the judges with commercial relationships struck with leading multinationals as well as the NHS. With significant interest from investors, clinical trials in progress and plans to start manufacture soon, Open Bionics is poised to make a major impact.

In this category the judges were looking for entrants demonstrating the successful use of teamwork in the creation of an engineering or electronic product or system. In assessing the entries, the judges wanted to see how the team was composed and evidence of how its members interacted to meet its budget and project milestones. Kliklok identified an opportunity to develop a mid-range, flexible and compact, integrated cartoning system. The system needed to offer competitive speed and handle the wide range of carton sizes required by companies in the bakery and confectionery market. In a fiercely contested category the judges were impressed by the team’s good, honest and practical engineering, delivering an impressive output from a multinational project in short time.

The judges again had great difficulty choosing a single winner and wanted to award another Highly-Commended certificate. PRaVDA is a medical imaging instrument developed by the team at the University of Lincoln. The system contributes to the fight against cancer using proton beam therapy.

The choice of material can make or break an engineering product, so the judges were looking for evidence of how the properties of a material (or material combination) were exploited to solve a design challenge. Plessey is the only major manufacturer making Gallium Nitride-on-Silicon LEDs. Advantages of this technology include LEDs that emit more light than standard sapphire-based LEDs due to their higher drive current, and excellent thermal performance.

In assessing entries, the judges looked for an electronic product or component that addresses a particular market need and which brings a significant performance improvement; either over a previous product or over competitive devices. The judges commented that while capacitive touch is finding broad application in a range of consumer and industrial products, Peratech’s matrix sensor adds another dimension to interface technology and they were impressed by the range of potential applications.

In this category the judges were looking for an engineering product for which an innovative approach has been used to meet a particular market need. They wanted to see evidence of how the need for the product was assessed, along with an indication of time to market. The judges commented that there is a pressing need to improve the performance of small engines and hybrids. The sCharger brings back the response provided by a traditional supercharger without the power wastage. It gives these engines the boost they need without the compromise of turbo-lag.

The judges were looking for products or subsystems that have made a significant difference in the aerospace sector. They were looking for a clear explanation of the function performed by the product or subsystem and evidence of how it has enabled a significant technical advance for the sector. Artemis from Smith Myers allows a search and rescue helicopter to find a missing person by turning their mobile phone into a rescue beacon. Being based on the mobile phone, something which most people carry with them, provides an elegant solution that could be rolled out in other areas such as disaster relief.

Engineering Ambassador of the Year: Iulia Motoc – University of Kent

In this category, the judges were looking for companies or individuals who are engaging on a regular basis with a local school or educational establishment to promote engineering. The judges commented that Iulia, a PhD candidate in Electronic Engineering and IEEE Program Coordinator in the student branch, is responsible for outreach sessions for all school students and part of the organising committee for IEEE Teacher In-Service Program Week. She has thrown herself into everything to ensure as many young people as possible are exposed to the potential of an exciting career in engineering and technology.

Based in North Devon TDK-Lambda can find it difficult to attract and retain engineering talent. Engineering and management staff across all areas of its business give their time to get involved with a range of STEM initiatives. Currently, 25 employees are engaged in STEM/School activities.

The judges took a range of factors into account, including: the knowledge which has been applied by the young engineer; the contribution made to projects; and the degree of innovation required. They also considered the nominee’s personal qualities that promote the engineering profession. Rob Hanson is a design engineer for the national assistive technology charity, Designability. For the last two years, he has applied an immense amount of passion, enthusiasm and sincere compassion into his work. The judges said Rob is an unsung hero, exhibiting excellent use of engineering skills in a difficult arena. He has delivered great designs and is a shining example to other engineers.

Entrants in this category were nominated by fellow engineers who needed to demonstrate evidence of innovation within strict budgetary and time constraints and possibly solutions that improve on the initial design brief. Although still a young engineer, Jake has led the design of a flagship product from a clean sheet, while reformatting the company’s infrastructure to speed the design process. In his short career, he has already been involved in 10 patent filings.

To identify the Consultancy of the Year, the judges looked for evidence that the shortlisted companies are developing innovative and timely solutions to engineering problems posed to them by their customers. Other factors taken into account included the ratio of consultancy staff to the number of projects delivered, number of staff applied to those projects and their success. The judges were also interested to see how the consultancy has developed during the last five years and how it plans to grow its business.

The judges said, Drive System Design has shown consistently strong and focused performance whilst working in a demanding industry sector. The growth in its turnover during the last five years, as well as its investment in control and transmission technology for the emerging electric vehicle market is beginning to pay off.

Penso Group is a global manufacturing specialist providing a turnkey engineering service to customers in the automotive, rail, aerospace and defence sectors. Over the last five years, the group has grown from 145 employees to more than 200 and invested more than £12million in the latest software technology.