BrightSign LLC to preview the upcoming XD4 and XT4 at ISE 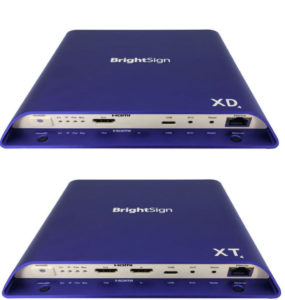 BrightSign, LLC, the global market leader in digital signage media players, has announced that it will be previewing the first of its Series 4 Players, BrightSign XD4 and XT4, at ISE in Amsterdam in February 2018, Booth 8G-240.

Following the award winning Series 3 players, four models in the BrightSign Series 4 range are newly designed to support Dolby Vision and HDR10+. In Q2 2018, the XD234 and XD1034 will replace the current XD Series 3 models and XT244 and XT1144 will replace the current XT Series 3 line. As always, the XT line will support PoE+ and XT1144 supports HDMI In to deliver Live TV to end-points either via an HDMI cable or streaming over a network. The new players will continue using the sleek, patented industrial design of the Series 3 players.

Jeff Hastings, CEO, said: “We are constantly looking to improve our award winning players and build in support for the newest video formats. The new models offer support for the latest, most advanced standards in 4K HDR, Dolby Vision and HDR10+.”

BrightSign will showcase three of its BrightSign Built-In DSM (digital signage module) integrated solutions – the iDisplay by Outform, as well as a range of displays from AVNU and Industrial Image. Also in the BrightSign stand will be demonstrations of conference room scheduling, 4K HDR10+ and 4K Dolby Vision decoding, BrightAuthor, BrightSign App interactivity and more!